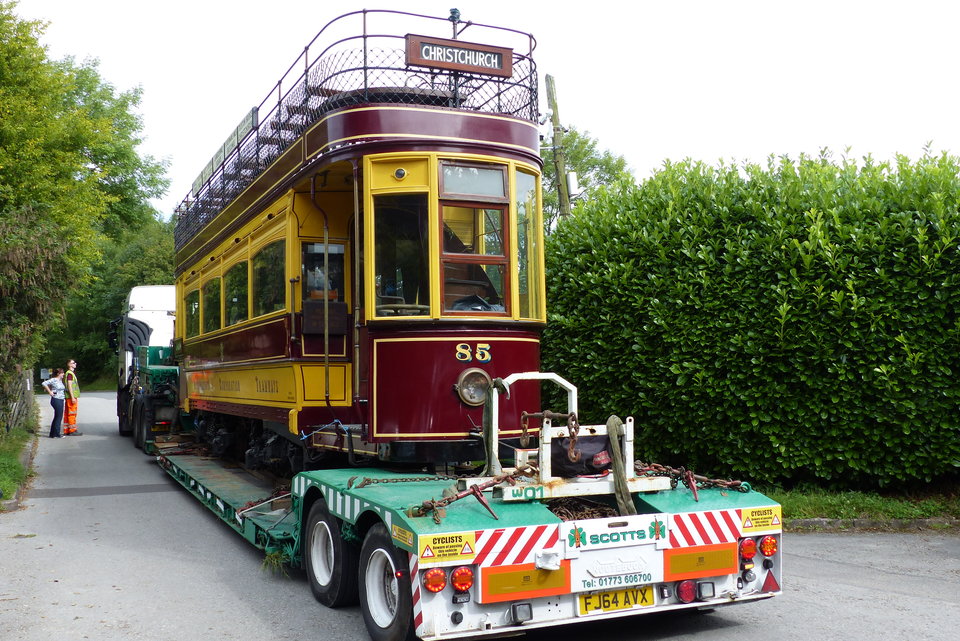 Bournemouth 85 arriving at the museum on 25 August 2017. Photo: Jim Dignan

Although the great majority of Great Britain’s first generation tramways adopted the ‘standard’ gauge of 4’ 8½”, this was far from universal. Bournemouth Corporation was one of over fifty tramways to operate on the narrower 3’ 6” gauge.  These included some major operators such as Birmingham Corporation, though a variety of other gauges could also be found during the heyday of tramway operation.

There were some benefits to be derived from operating narrower gauge tramways as they took up less road space, were somewhat cheaper to construct and could also negotiate tighter curves and steeper gradients. But there were also drawbacks as operating speeds tended to be lower because narrow gauge tramcars were generally less stable – especially when operating in exposed areas with high wind speeds.

Another potential drawback was the possibility that neighbouring tramway systems might adopt different gauges, which would prevent any ‘through-running’. This was not a problem for Bournemouth Corporation’s Tramways, however, since the neighbouring tramway in Poole had previously adopted the same 3’ 6” gauge for its system which had opened on 6th April 1901.  Bournemouth Corporation’s own tramway commenced operations just over a year later on 23rd July 1902 and a subsequent extension also served the adjoining borough of Christchurch.  Following a protracted legal battle, Bournemouth Corporation ultimately succeeded in gaining control of the entire system on 16th June1905. Bournemouth 85 in service during the 1920s, after the addition of platform vestibules. Photo courtesy of Crich TMS photo archive.

Bournemouth 85 was one of a batch of ten double decked bogie tramcars (also known locally as “Dreadnoughts”) that were built for the system in 1914. One of the distinctive features of the tramway was its very conservative approach to the design of its tramcars.  Indeed, the final batch, which arrived in 1926, looked remarkably similar to those ordered in 1902 when the system opened.. One of the main modifications to number 85 was the addition of platform vestibules in 1920, which gave the drivers a degree of protection from the elements.

Rather unusually, the tramway had initially adopted a conduit system of current collection for the central Bournemouth district, though  these lines had been converted to overhead wiring by the time number 85 was commissioned. Another distinctive feature of the tramway was that during the First World War, instead of recruiting female staff to replace the men who were called up to serve, Bournemouth relied on boys between the ages of 16 and 18, who were technically ineligible for call-up. The entire Bournemouth fleet of 115 tramcars was still going strong at the time the decision was taken, in 1934, to close the system and replace the tramcars with trolleybuses. When tramway operations ended on 8th April 1936, Bournemouth 85 was one of ten tramcars to be given a new lease of life on being sold to the Llandudno & Colwyn Bay Electric Railway. They were the first double deck tramcars to run on this 3’ 6” gauge system and became its main workhorses  until its closure in 1956.

Like Bournemouth Corporation, Llandudno & Colwyn Bay Electric Railway had also been contemplating a switch to trolley bus operation at around the same time. Indeed, this was part of a general shift in attitude on the part of many tramway operators in the wake of the 1931 Royal Commission on Transport, which had recommended that tramways be replaced by trolleybuses or buses. 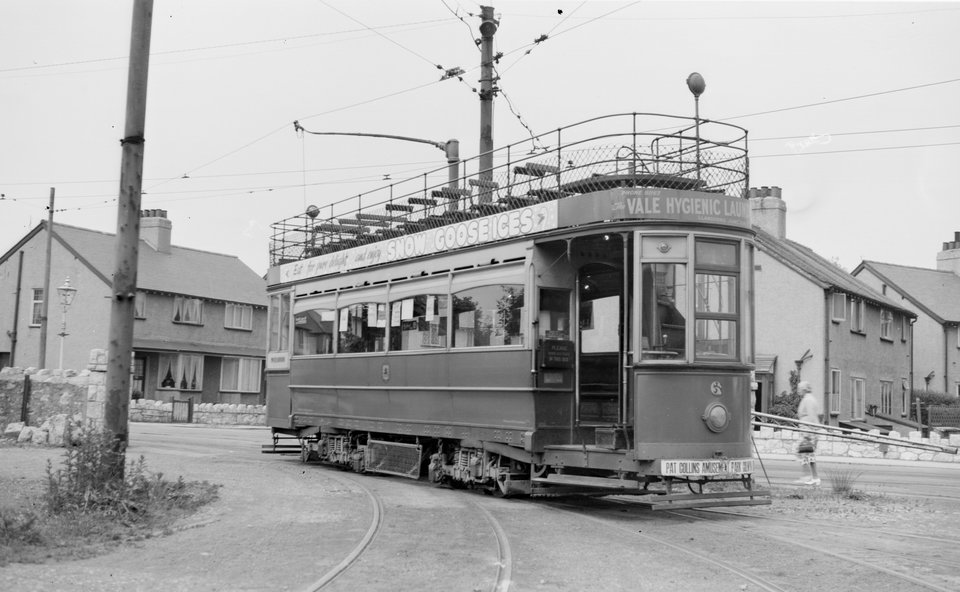 However, the cost of resurfacing the road after abandonment was so high that the system was reprieved for another few years.  The ageing fleet was even renewed by purchasing second hand tramcars from other operators that had decided to discontinue their systems. This extended the life of the L&CBER for the duration of the war and even a few years beyond. And so number 6, as it had been renumbered, continued in service for another twenty years after its first withdrawal from service in Bournemouth.

By 1953, however, the tramway was losing money and so, on 24th March 1956, it became the last 3’ 6” tramway, as well as the last remaining privately owned tramway, in the country to close.  Attempts were made by local enthusiasts to keep the system going as a largely volunteer-run tourist attraction but these were unsuccessful. So Bournemouth 85 and its sister cars were the last British open-topped trams (apart from those in Blackpool) to operate in this country.

Most of the fleet was scrapped at this point and it was only the intervention of a member of the public (Mr Richardson of Rhyl), who stumped up the sum of £75, that saved Number 6 from the scrap man. Even after being taken into preservation, however, the tramcar’s continued survival has been somewhat precarious.

Initially the tram – still in its L&CBER no. 6 guise – was presented to the Museum of British Transport at Clapham, where it went on display. Then, when this museum closed (in 1973), ownership passed initially to the Science Museum, which received two rival proposals for its restoration. One came from the then-recently formed Llandudno Tramway Society, which wanted to return the tram to Llandudno; and the other, which was successful, came from Bournemouth Corporation. At this point number 6 returned to its original home city and, in the course of its restoration at the Mallard Road depot, reverted to its original identity as Bournemouth 85. Initially it was put on display in Bournemouth’s own transport museum until it, too, closed down. After a short period in storage, it was then transferred, appropriately, to the Christchurch Museum of Electricity.  This was housed in what was believed to be the only Edwardian power station still surviving in Britain; and one that had provided power for the area’s first trams.

When this museum in turn closed down in 2012, as a result of disability accessibility issues, the tramcar again faced an uncertain future.  This was resolved when the National Railway Museum, which had in the meantime taken possession of the tramcar from the Science Museum, gifted the tramcar to the National Tramway Museum Society. 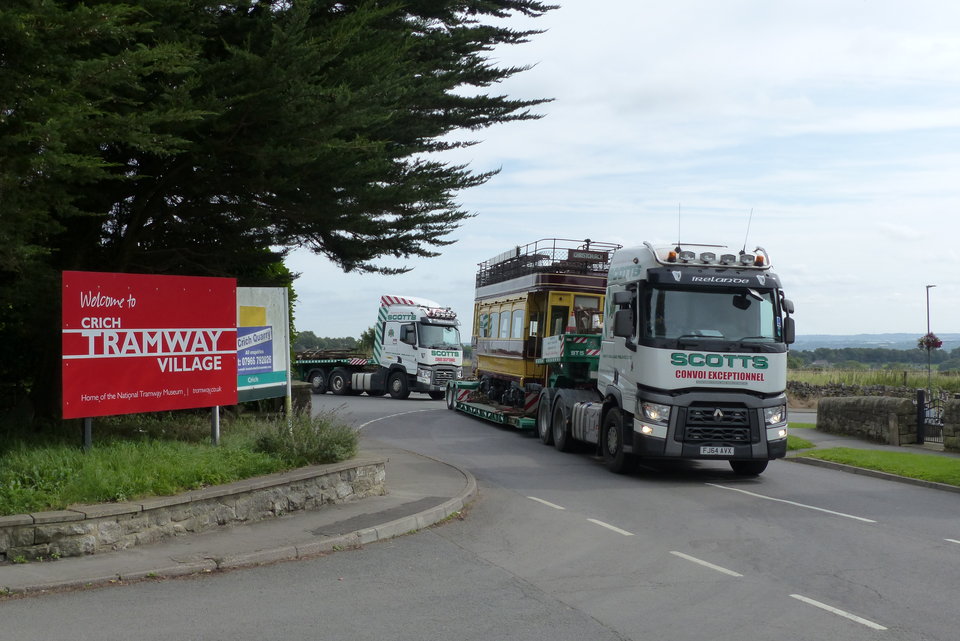 On 25th August 2017 the tramcar was brought to Crich by low-loader and placed temporarily in the depot pending a transfer to the Exhibition Hall later in the year.

Bought privately and presented to the Museum of British Transport, Clapham in 1956 where it retained its L&CBER livery.
1973 moved to Mallard Road depot, Bournemouth on closure of the museum at Clapham.
After restoration, the tramcar was moved to the Museum of Electricity in Christchurch.
When this, in turn, closed down in 2012 the future of the tramcar was uncertain until ownership was transferred on 20th September 2016 from the Science Museum to the National Tramway Museum.

Restored to its original livery and condition by Bournemouth Corporation transport staff at the Mallard Road depot.

Intended as a static exhibit to display a typical narrow gauge tramcar.