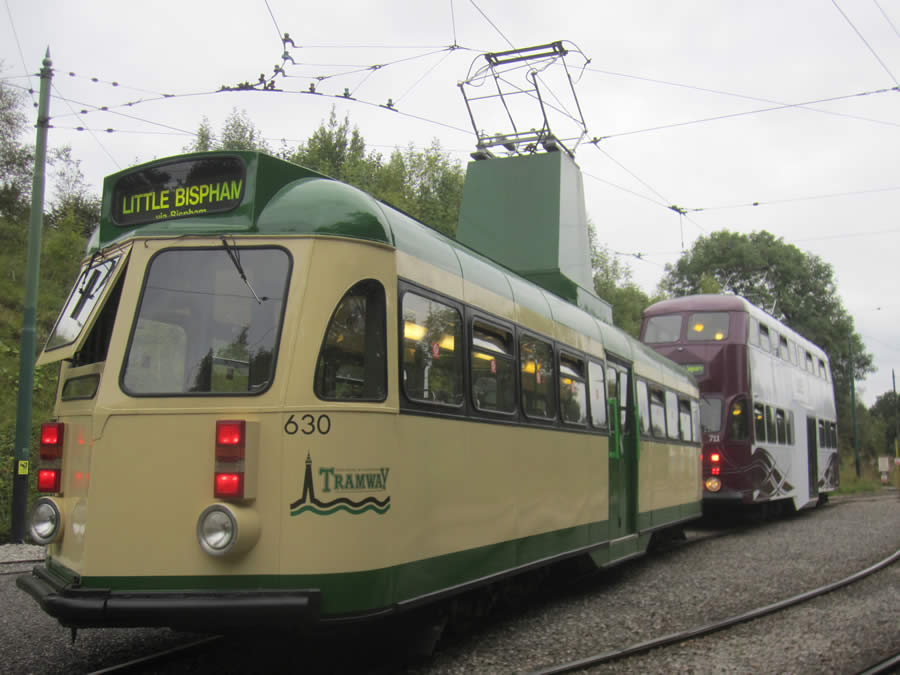 Blackpool 630 is a tram whose appearance has undergone a radical transformation over the seven plus decades since its introduction in 1937. Originally numbered 293, it was a Brush-built successor to a then-innovative design known as the ‘railcoach’, which sought to emulate the levels of comfort associated with the most advanced road coaches of the day. Number 630 was not one of the original railcoaches, which had been built earlier in the decade by English Electric, but formed part of a subsequent batch of 20 very similar looking tramcars that were ordered from Brush & Co. of Loughborough following the closure of the adjoining Lytham St Annes tramway in 1937.

Although built to the same general specification as their predecessors, the detail of the Brush Cars’ construction was different. This was partly because most of the original components and design features were covered by patents owned by English Electric and had to be designed afresh but also because the Brush tramcars represented a further development and refinement of the original railcoach concept..

In its original form, the tramcar looked very similar to the partially restored Blackpool 298, which is also in the collection, though it is currently in off-site storage. In addition to the streamlined ends and central entrances with air-operated sliding doors, the original design also incorporated sliding sunshine roof panels, wind-down windows, fixed head trolley pole, twin destination screens at each end and an additional one above each central entrance door. Inside, they were built to a very high level of refinement with cushioned seating, heaters, clock and ornate ‘alhambrinal’ ceiling panels that housed concealed lighting, which is why they were considered by many to be among the most luxurious trams ever built for British tramways.

Over time, however, most of the Brush cars, together with their railcoach predecessors, were progressively modified, which drastically altered their external appearance and resulted in a much more utilitarian and increasingly ‘bus-like’ interior. During the mid-1960s the tram’s electrical equipment and controllers were removed and replaced by the ‘standard’ English Electric equivalents that were salvaged from the original batch of railcoaches as they were withdrawn from service. The gradual transformation of the tramcar’s external appearance began at this time with the panelling over of the distinctive opening sunshine roof panels and entrance door destination screens while the original double destinations screens at each end were replaced by single ones and half-drop windows were also fitted.

Then in the mid-1990s the tramcar was given a major overhaul in the course of which it received modern high-intensity headlights and indicator lights and rubber bumpers, an enclosed tower to support the pantograph that had replaced its original trolley pole and different lifeguard arrangements. The interior was also ‘modernised’, which resulted in the provision of fixed ‘bus-style’ seating in place of the traditional reversible tram seats, new interior lighting and replacement windows. For a time the tram operated with a yellow all-over ‘Karting 2000’ livery. 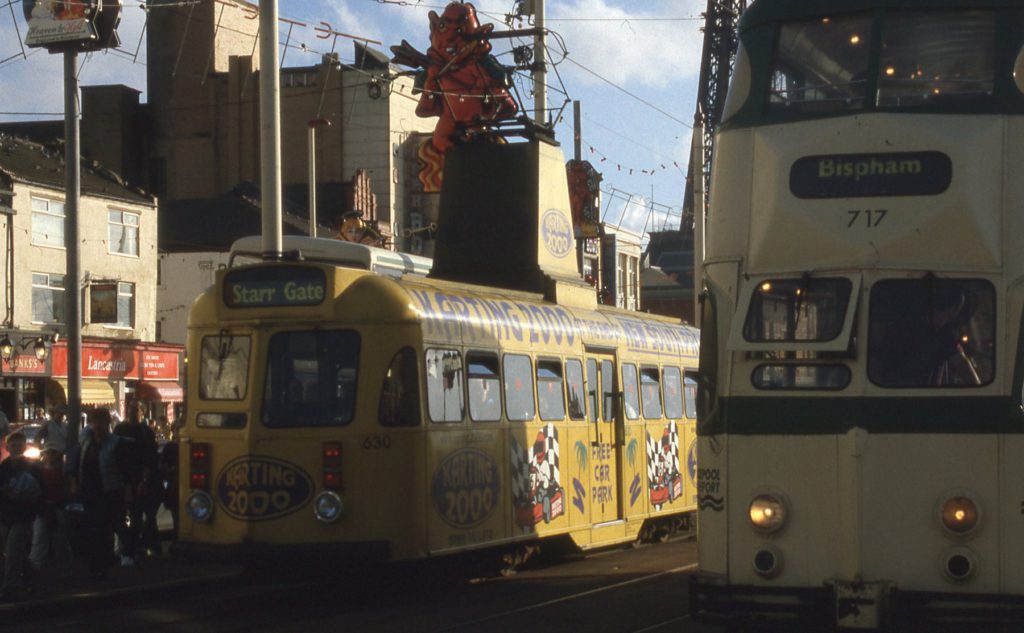 Initially the Brush tramcars were housed in the Rigby Road depot, from which they mainly operated the Lytham road service. Later (from Easter 1964), they were switched to the Starr Gate to Fleetwood service and although they were relegated to summer-only services for a time they resumed their all-season duties following the major overhauls they received during the mid-1990-s.

Number 630 continued in service until 2011 at which point it was withdrawn and repainted by Blackpool Transport Services in an authentic 1990s style green and cream fleet livery before embarking on a new role as part of the operational fleet at Crich. There it joins sister car number 635 (original number 298), which retains more of the original features but would need further extensive – and expensive – modification to restore it to its much more authentic original condition.

In September 2017, 630 returned to Blackpool to participate in the 80th Anniversary event celebrating the introduction of the Brush Railcoach trams to the Blackpool fleet in 1937.  It remained in Blackpool over the winter in order to free up space at Crich so that refurbishment work could be carried out on the museum’s depot buildings.

Following a final farewell tour of the entire Blackpool system on 19th May 2018, the tramcar returned to Crich the following week to resume its operational duties there.

1960s – fitted with heaters, motors and controllers from scrapped English Electric railcoaches and renumbered 630 (from 293) in 1968 as part of a general fleet renumbering. Original opening sunshine roof panels and side entrance screens were panelled over and twin destination screens at each end were replaced by single screens. Half drop windows fitted.
Mid-1990s major overhaul of both exterior – new head and indictor lights, rubber bumpers, enclosed tower for pantograph in place of original fixed head trolley pole and replacement windows – and also interior including the installation of fixed seating and new interior lighting

Withdrawn from passenger service on 30/10/2011 and repainted by Blackpool Transport Services in mid-1990s cream and green livery.

The tram was withdrawn in operational condition

Current status
Restored in operational condition. Commissioned for service during the current season, but only for training duties.
Date started operating at Crich
2012. Has operated in 9 seasons including, most recently, 2021.
Total mileage covered at Crich
3,646
Current location
Depots
Future plans

Likely to continue as part of the operational fleet for some time. However, its longer-term prospects are uncertain in view of the impending restoration of the much more authentic Brush car, number 298. One possibility, currently under assessment, might be to convert it to an additional access tram.