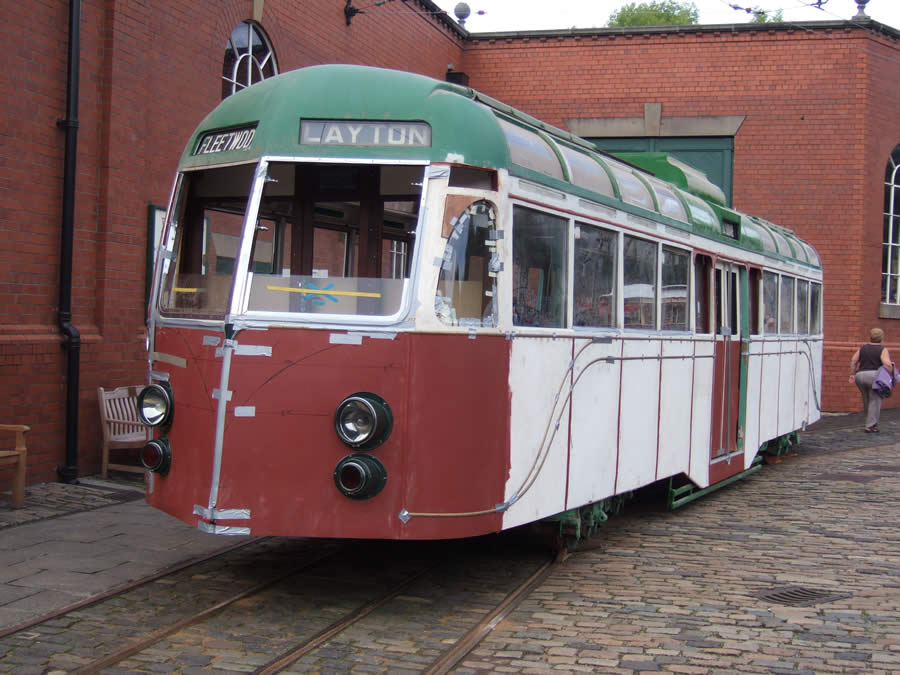 When Blackpool Corporation decided to modernise its ageing fleet of trams in the early 1930s, the first vehicle to be commissioned was a single deck tramcar built by English Electric to a revolutionary new streamlined design that became known as the ‘railcoach’ because it sought to emulate the levels of comfort associated with the most advanced road coaches of the day.

This radical new design with its pointed front ends formed the basis of several complementary classes of trams including the “open boat” replacements for the historic toast-rack trams (represented by 236) and a stylish series of double deck trams known as “balloons” (as represented by 249). Between them, these trams conferred a distinctive family identity on most of Blackpool’s tramcar fleet until well into the post-war era. 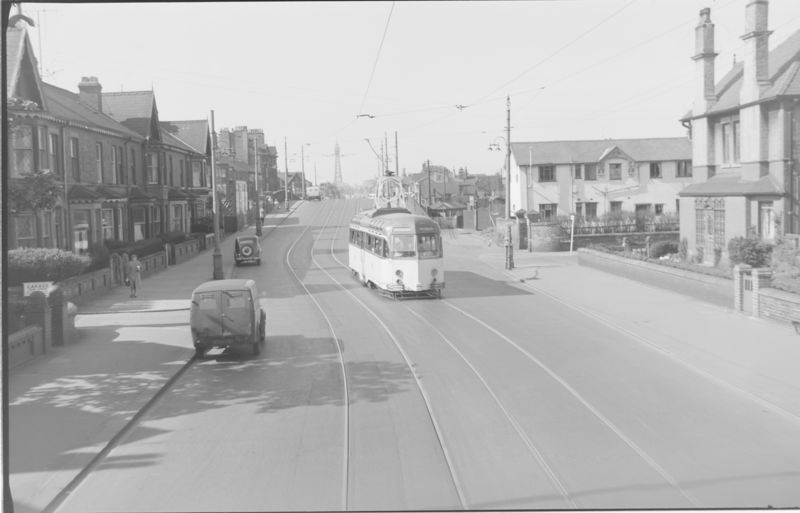 Although it looks somewhat similar, Blackpool 298 was not one of the original batch of railcoaches but was part of a supplementary order for 20 additional trams that were required following closure of the adjoining Lytham St Annes tramway in 1937. Unlike its predecessors, 298 was built not by English Electric but by rival manufacturers Brush, of Loughborough, who won the order, although the design specification was very similar.

Indeed, the same designer – William ‘Mac’ Marshall, now working in a freelance capacity – was used, but because most of the design features had been patented by English Electric, almost every detail of the trams had to be designed afresh (albeit to virtually the same specifications).

The Blackpool Brush tramcars represent a further development of the original railcoach design and were built to such a high standard of refinement that they are considered to be among the most luxurious trams ever built for British tramways. The sliding central doors with which they were originally equipped were air operated though these were later replaced by ‘jack-knife’ doors.

The bogies and motors with which the tramcar was originally equipped also differed from the earlier railcoaches but during the 1960s 298 was re-equipped with English Electric motors to bring it in line with the rest of the fleet. Number 298 was largely used on the promenade and Fleetwood routes and In 1968 it acquired the number 635 as part of a more general renumbering of the fleet.

It was withdrawn in 1974 and was selected for preservation in 1976, despite being in rather poor condition.  This was mainly because it was felt to retain more original features than any other survivors of its class, most of which had by this stage been extensively rebuilt either as towing cars or, even more drastically, with adaptation for ‘one-man operation’ (OMO), as in the case of Blackpool 5, which is also in the collection.

Even though it was the first of its type to enter preservation, the process of restoring the tram to its former luxurious glory has nevertheless been protracted and continues to present a number of major challenges. A considerable amount of work has now been undertaken, albeit on a piecemeal basis and in various locations over a number of years. Blackpool 298 leaves Crich on 11/7/2014 to be taken into long-term storage and free up space in the depot. Photo: Jim Dignan

The tramcar was moved to Crich in 2005 and since mid-2014 has been stored off-site while awaiting its place in the queue for restoration once sufficient funding becomes available.  Its long wait is nearly at an end, however, as funding has now been secured and a timetable for its restoration agreed, starting in 2020 with the manufacture of a new sub-frame. 298 departing from the museum premises at Crich. Photo: Jim Dignan.

On 11th June 2021, the tramcar  returned to Crich so that work could begin on the restoration of its body following the arrival of a replacement sub-frame that has been built by the Ffestiniog Railway.

1960s – fitted with heaters, motors and controllers from scrapped English Electric railcoaches and renumbered 635 in 1968 as part of a general fleet renumbering.

Withdrawn from passenger service in 1974

Following its withdrawal 298 has moved to a number of locations around the country but although some restoration was undertaken much work remains to be done.

The tram has received a considerable amount of attention since withdrawal, notably the bodywork, underframe and bogies but the restoration process is far from complete.

Restoration work is already under way with the construction of a new underframe. Despite an interruption brought about by the pandemic, full restoration is due to get under way commencing in the second quarter of 2021.