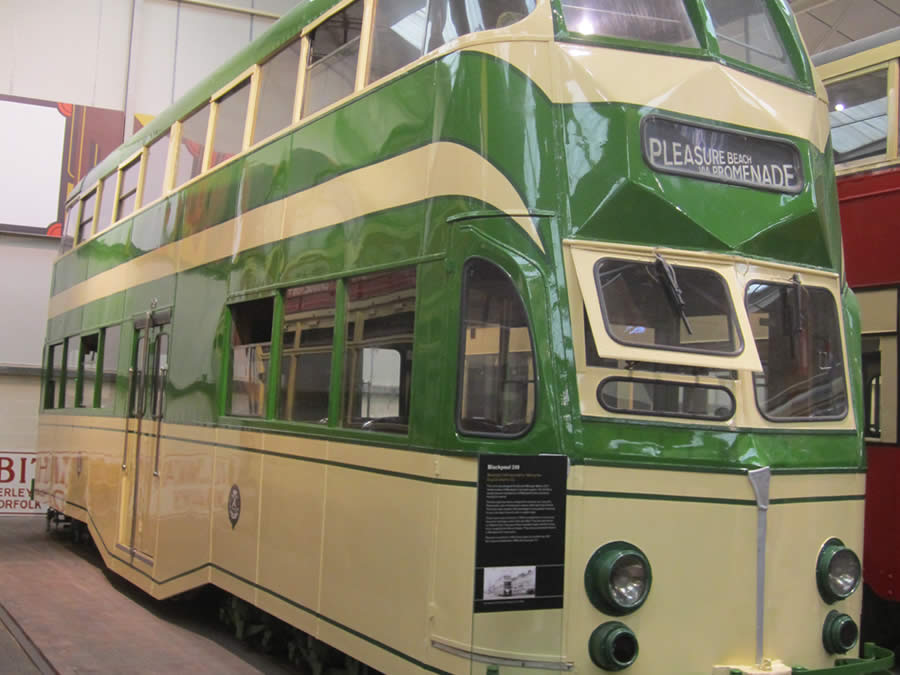 As part of its ambitious modernisation programme of the early 1930s, Blackpool Corporation introduced three new classes of modern streamlined tramcars to replace earlier vehicles that were felt to be showing their age. Hot on the heels of the single-deck railcoaches (represented at Crich by a later version, 298) and the “luxury toast racks” (represented by ‘boat tram’ 236) came a streamlined double deck tram that was envisaged as a replacement for the turn-of-the-century ‘Dreadnoughts’ (represented at the tramway museum by 59). Like its predecessor, the new tram had a legendary seating capacity (94). The first of this “luxury dreadnought” class of double-decked trams was introduced as an open-topped prototype in 1934 and 249 was the last of a dozen additional similar vehicles that were built to this design.

249 cost £2,688 when new and, shortly before its arrival in Blackpool, it featured in a trade exhibition held at the English Electric Strand Road Works between 3rd and 8th December 1934.  It was one of the last full-size standard gauge open-topped tramcars to enter service in Britain.

A further fourteen fully enclosed tramcars of similar design were ordered at the same time and their rather rounded streamlined appearance prompted the alternative nickname of “Balloons.”

249 initially formed part of the double-deck promenade service between South Shore and Bispham, which was extended to Cleveleys from 8th June 1935.  As they were fitted with stair head shutters, the open topped cars could run as single deck trams during the winter months.

Blackpool’s trams were heavily used during the second world war as a result of increased demand from evacuees and also military personnel stationed nearby and, because of this, it was decided to fit the open-topped cars with top covers, starting with 249 in August 1941. One of the problems with “style icons”, however, is that they can quickly appear dated as fashions change, and so it proved with the balloon class of trams, which endured a spell in the doldrums during the early post-war period. Even Walter Luff, the tramways manager who had introduced them, considered them somewhat old-fashioned by this stage (an image that was reinforced by their rather drab green war-time livery which they still carried).

An even bigger handicap, however, is that, as double-deckers, they were considered slow to load and therefore less efficient as ‘people movers’ than the more recently introduced single-deck ‘Coronation’ cars, whose ability to operate a frequent service was for a time thought to represent the way forward for the tramway.

Fortunately for the balloon trams, however, fashion can also prove fickle at times and, with the appointment of a new manager (Joseph Franklin) in 1954, they were given a new lease of life. At a time of soaring operating costs and falling revenues, he saw that the large capacity Balloon trams could have a valuable role to play in his strategy of utilising the tramway as an attraction in its own right by introducing illuminated tours, reviving the circular tour and using new feature cars to attract commercial sponsorship.

This revival in their fortunes was accompanied by the replacement of the upper deck bench seats that had been removed during the war, which restored their capacity to 94. By this stage, number 249 had also acquired a top cover (fitted in 1941).  The application of a new, brighter, livery in the last 1950s also helped to rejuvenate their image.

Gradually these changes contributed to a more extensive role for 249 and its fellow balloons, particularly after track improvements in May 1958 enabled double deck tramcars to operate all the way to Fleetwood.. In 1960, the tramcar was equipped with a single destination indicator, which replaced the original difficult-to-read double indicators. The entire balloon class of trams was renumbered in 1968, whereupon number 249 became 712. As workhorses of the fleet for nearly 50 years, the trams provided largely reliable and trouble-free service before many (including 249/712) were rejuvenated in 1982, which involved a thorough overhaul in which the tram was stripped down to the bare frames, repanelling, rewiring, interior refurbishment and the application of a new livery. During the 2003-4 season 712 was repainted in 1960s green and cream livery and sponsored by Trams magazine.

Following its withdrawal from operational service in Blackpool in 2010, number 249 was refurbished and repainted in preparation for its new role as a static exhibit in the main exhibition hall at Crich. 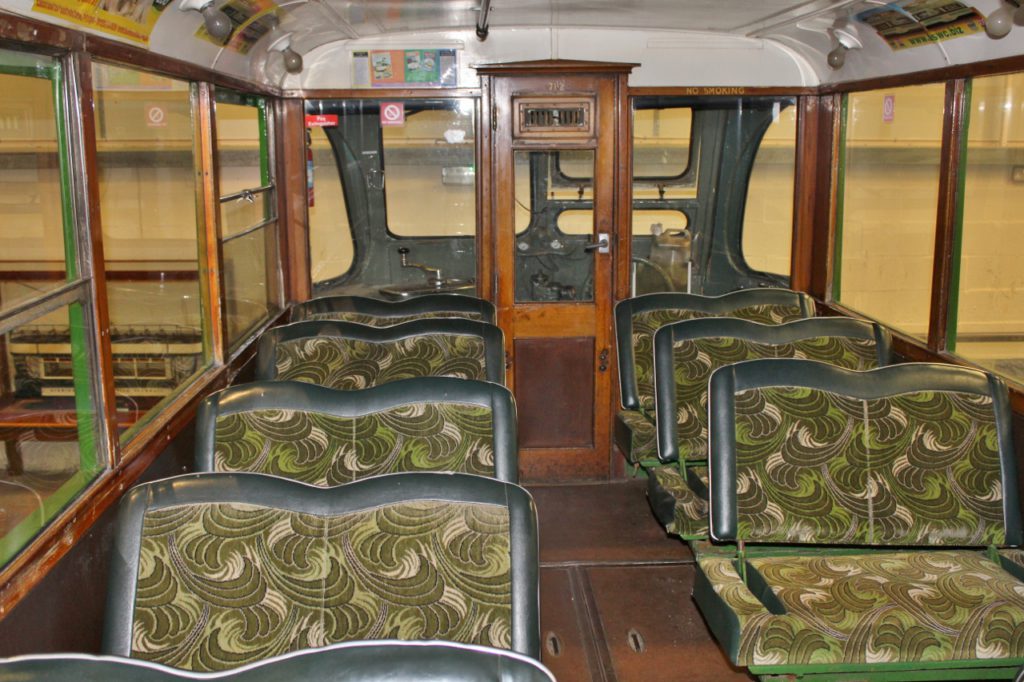 Visitors are now able to inspect 249’s lower deck, as it would have appeared while the tramcar was in service in Blackpool;. Photo: Paul Abell, 21/6/18

In terms of livery, the tramcar now depicts a classic 1930s-style art deco design and visitors can access the lower deck to see what the interior fittings were like during its operational heyday. In other respects, however, the tramcar is still in 1970s condition and has not been  restored to a fully authentic 1930s-era appearance. 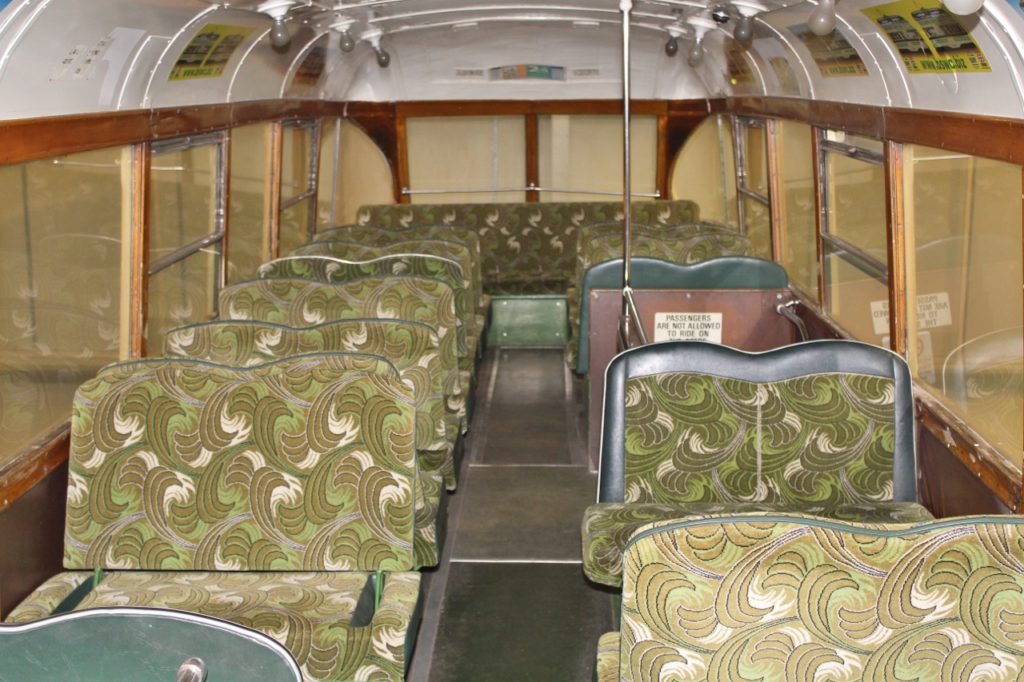 August 1941 – top cover fitted and wooden seats on the upper deck replaced by upholstered ones. The bench seats at the end were removed at the same time.
During the war the green and cream livery was replaced with a mainly green one to reduce visibility, which lasted till the late 1950s.
The additional bench seating on the upper deck was restored after 1954, bringing the capacity back to 94. 1960 single destination indicator fitted in place of the original somewhat illegible double indicators.
1968 renumbered as 712; overhauled and given a new livery in 1982.
July 1984, fitted with pantograph

Withdrawal from passenger service in 2010. [Its final passenger carrying service was on 7th November 2009]

Refurbished and repainted in pre-war livery by Blackpool Transport Services in 2010 prior to its acquisition by the National Tramway Museum at Crich.

Acquired primarily as a static exhibit. A full restoration to operational condition would be a major – and expensive – undertaking.