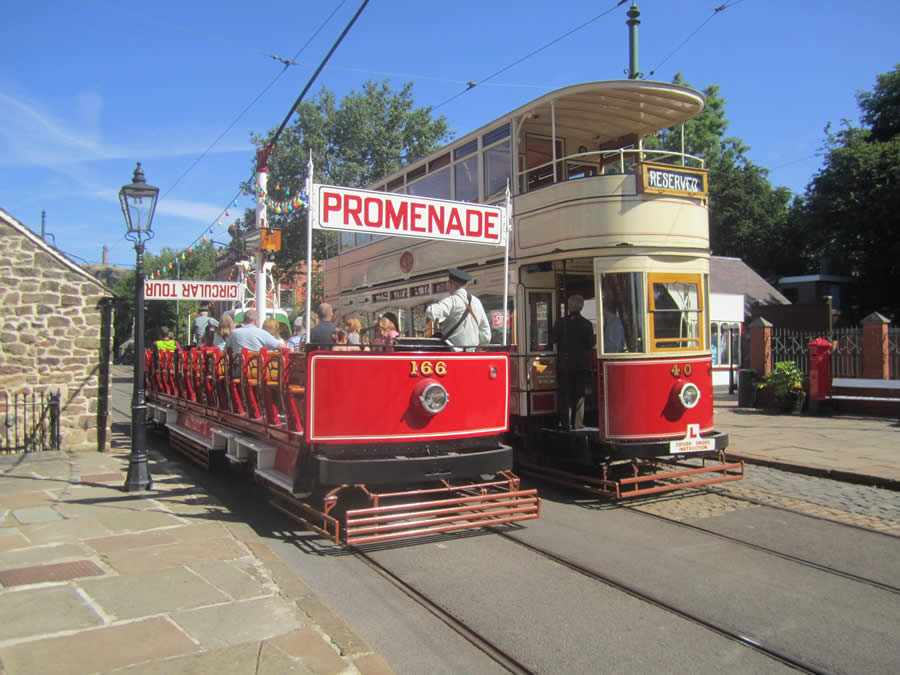 In addition to their primary function as supremely efficient conveyors of urban factory workers and others to and from their workplaces, tramways also performed an important secondary role in many seaside resorts by providing relatively cheap and effortless sight-seeing opportunities for visiting holiday-makers. This functional differentiation was also reflected in the form of the tramcars themselves, with those designed for the tourist trade being among the simplest of all public transport passenger vehicles. 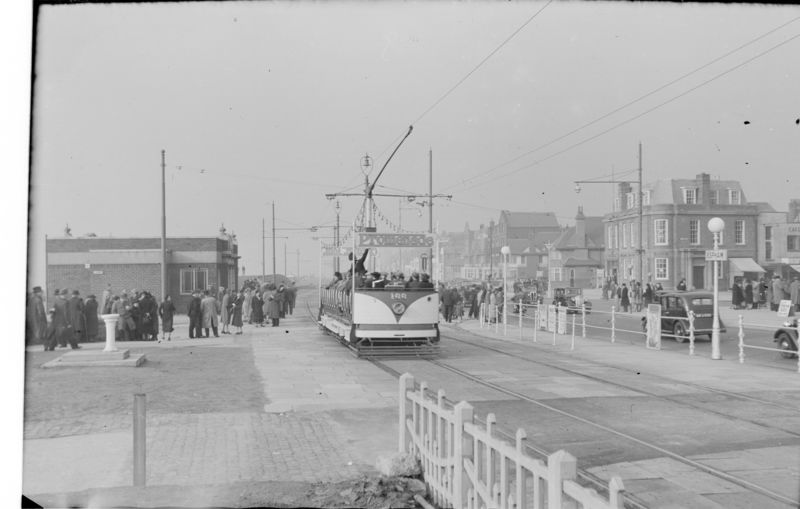 Blackpool 166, with its traditional open air ‘toast-rack’ design illustrates this principle perfectly since it comprised little more than a motorised underframe topped by reversible wooden benches, a central trolley-mast supporting destination blinds and a dash with controllers at each end that was surmounted by a swing-over board indicating ‘PROMENADE’ or ‘CIRCULAR TOUR’. This simple moving platform afforded maximum carrying capacity on its full-width wooden cross-bench seats with minimal obstruction of the coastal scenery.

Toast-racks were the tramway equivalent of the open-topped motorised charabancs that provided many factory workers with their annual works outings and sight-seeing tours in the early part of the twentieth century. Blackpool Corporation initially invested in twenty four toast-rack trams, the first of which were delivered in 1911, and these were to prove highly popular – and profitable – during the inter-war period, an era in which domestic holidays to traditional resorts such as Blackpool were booming.

The traditional route for toast-rack trams started in Talbot Square by the side of the Clifton Hotel and took holiday-makers along the promenade as far as Victoria Pier before turning inland up Station Road and Lytham Road to Royal Oak, returning them to Talbot Square via the Marton route. Perhaps the British public’s abiding affection for vintage tramcars is nurtured in part by the nostalgic memories conjured up by these early seaside tourist attractions.

Built in 1927, 166 was one of a final batch of six of these most traditional of seaside tramcars to be ordered by Blackpool, which were also the last of their kind to be built in Britain. The additional trams were intended to operate an extension of the Circular Tour along new South Promenade and up Squires Gate Lane but because this wasn’t inaugurated until 1932, 166’s main duties consisted of promenade specials, the circular tours being a supplementary activity.

Although it saw only thirteen years of passenger service before war broke out, 166 was modified in 1936 when a central gangway was inserted between the seats (reducing seating capacity to 52) which made it safer for conductors to collect their fares without having to cling precariously to the outside edges of the seats while balancing on the running boards. Two changes of livery were also applied during this brief period. The outbreak of war effectively put an end to the traditional intensive toast-rack tours and the original fleet of 24 were scrapped during the war years. A few of the remaining cars are thought to have operated during the war (in 1940 and 1942) but after 1945, most (including 166) were then put into storage with a view to scrapping them.

Two of the remaining toast-racks – 166 and its sister car 165 – were granted a reprieve when they were designated as works cars (numbered 17 and 16 respectively), but this looked like a temporary stay of execution until salvation appeared (for 166 at least) in the unlikely guise of the BBC! In October 1951 sister car number 165 was pressed into service as a mobile platform for the first ever live broadcast from a moving vehicle when the BBC decided to film the famous Blackpool illuminations (which included, of course, a number of illuminated tramcars).

So popular were these transmissions that, two years later in 1953, 166 was retrieved from its open air sidings and similarly adapted (by removing its seats and substituting a large box-like structure to accommodate the massive camera equipment that was required in those days). The two ‘television cars’ continued to participate in these annual outside broadcast outings until 1965, by which time technological advances in camera equipment and changing viewer tastes rendered them redundant. Car 165 was then cut up in 1968, but 166 survived until 1972 when it was offered to the Crich Tramway Museum.

There, Blackpool 166 became the first tramcar to receive a total rebuild, a process that was completed by 1974 in time for that year’s Transport Extravaganza. As a toast-rack car, the restoration project was more straightforward than most, though it still took two years to undertake. One of the main challenges was to reconstruct the full-width cross-bench seats, but fortunately one of the originals had survived to serve as a template. Having returned to passenger service after a 32 year interval, 166 continued in operation until 1988 when a loose wheel necessitated a temporary withdrawal from service. Ten years later it was again out of commission for a period of five years before returning to service in September 2004. .

As an open-topped car, it is popular with visitors during sunny periods and also with tram crews and maintenance staff since it is easy to clean and – for obvious reasons – requires little in the way of bodywork maintenance.

1927 – originally numbered 160 for a few months but was then assigned the number 166 in order to make way for a new Standard tramcar no. 160.
1936 – central gangway inserted between seats, reducing capacity to 52. Two changes of livery since its introduction. Put into storage at the end of the war and then converted to a works car (number 17). Converted for use as a mobile outdoor broadcast platform between 1953 and 1965.

Withdrawal from passenger service at the end of the war.
Final withdrawal in 1965

Offered to Tramway Museum Society in 1972 and arrived on 9th June.

First tramcar to be fully rebuilt at Crich, 1972-4

Current status
Restored to original full-width seating but not the wooden foot rest bar under each seat with which it was originally equipped; operational condition. Commissioned for service as part of the operational fleet during the current season.
Date started operating at Crich
1974. Has operated in 38 seasons including 2021
Total mileage covered at Crich
16,708
Current location
Depots