Blackpool Corporation No. 59 aka “Dreadnought” 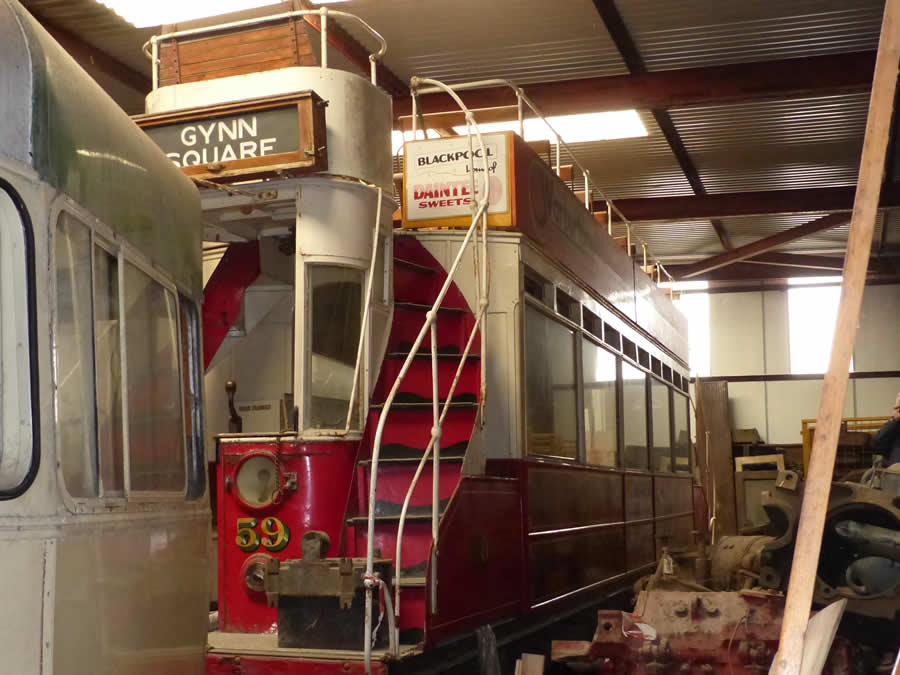 Blackpool 59 is a unique tramcar. It was built to an 1894 design by the Midland Railway Carriage and Wagon Company which, as its name suggest, is chiefly known for its railway products, though it was also the first commercial builder of electric tramcars in Britain. It is the sole survivor of an iconic class of trams known as “Dreadnoughts” (after the Royal Navy battleships of this name), though strictly speaking there were three distinct variants of the same basic design. Its most distinctive feature was the incorporation of twin staircases at each end, leading down to full-width steps offering access to and from the tracks, a feature that had been patented by a Mr Shrewsbury in 1897. Ever since the days of steam trams, the advantages of large double-deck bogie cars as supremely efficient ‘people carriers’ had long been recognised and Blackpool was the first tramway in the United Kingdom to introduce large bogie electric trams. One drawback with the original design, however, as illustrated by the museum’s steam tram trailer Dundee 21, is that the single set of corner steps at each end greatly increased the time needed for loading and unloading at each stop. Mr Shrewsbury’s patent offered an ideal solution to the problem by enabling loading and unloading to take place simultaneously, prompting Blackpool Corporation to buy the rights for £12. Car 59 was part of the third and final batch of ‘Dreadnoughts’ that was delivered in 1902 and featured a distinctive five-window lower saloon which accommodated 36 passengers on longitudinal wooden seats. Those with a head for heights could make for the upper deck where a further 49 seats were available from which to admire the view and enjoy the sea air.

For many years the Dreadnoughts formed the mainstay of the Corporation’s summer Promenade service, but even in the winter they were an obvious choice for ‘football specials’ on Saturday afternoons. With two conductors on board, the tramcars’ capacity to load, transport and unload passengers was unrivalled. Unfortunately, however, there was also a rather obvious ‘design fault’ resulting from the fact that passengers had to embark or disembark directly onto the tracks. The resulting risk of being struck by a following car should it fail to stop in time was aggravated by the fact that the 18-ton tramcar was only equipped with a hand brake and frequently afforded limited visibility for the driver as a result of holiday-makers’ suitcases being piled high on the front platform. 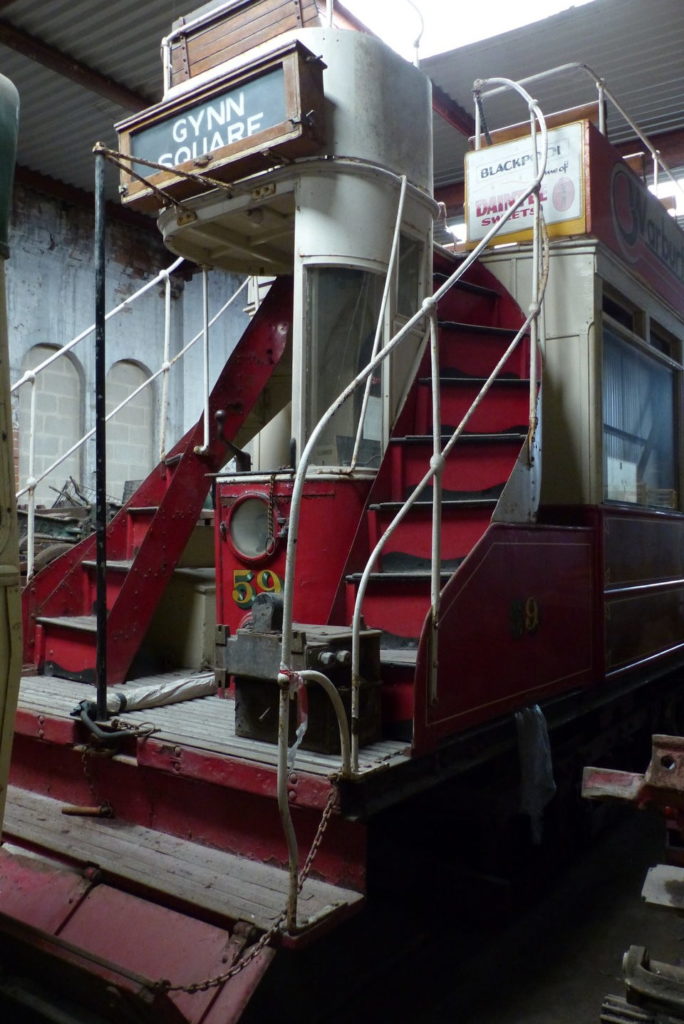 With limited platform space for luggage, it is easy to see how a driver’s visibility might be restricted. Photo: Jim Dignan, 8/12/2015

Following a number of accidents, substantial buffers were inserted at each end of the tramcar in 1931, dividing the steps into two and thereby reducing the danger posed to passengers although by this stage their days were already numbered.

Perhaps it is not surprising that the arrival of a fleet of more modern streamlined double deckers as part of the modernisation programme of the 1930s helped to seal the fate of these elderly leviathans, prompting the local Evening Gazette to publish a fitting, if guarded, tribute:

“They were clumsy, awkward and dangerous, but they were Blackpool’s own trams, and there was nothing like them anywhere else.”

Only one car was spared: number 59; though even this suffered a period of decline during the years it was stored at Copse Road depot in Fleetwood, where its lower saloon was used as a mess room for permanent way gangs. As time went by it suffered the ignominy of losing its top deck seats, decency panels, central buffers and most of the handrails. However, preparations for Blackpool Tramway’s 75th anniversary celebrations prompted a change of fortune as the tram was restored to approximately its 1922 condition and was given a new lease of life providing Promenade tours and enthusiasts’ trips in the run-up to the anniversary procession of 29th September 1960. For the next five years it continued to be wheeled out for special events and occasional enthusiasts’ tours, before being presented to the Tramway Museum Society in 1965. Once at Crich, the car saw regular, if intermittent, service during 1965 and again between 1968-1970. After September 1970 the car became a static exhibit while awaiting overhaul, but the onset of another anniversary (centenary of the borough in 1976) prompted a return visit to Blackpool in 1975. This inaugurated a second phase of relatively intensive use on its home circuit over the next few years. Thus, it was on hand to take part in the borough tramway’s centenary cavalcade of 20 tramcars in 1985. Blackpool 59 on the seafront at Blackpool. Dr Neil Clifton, 29/9/1985. © Copyright Dr Neil Clifton and licensed for reuse under the Creative Commons Licence

By 1990, the tram needed a major overhaul, however, so after a final enthusiasts’ tour on 11th November it returned to the National Tramway Museum at Crich. After five years on display there as a static exhibit it was moved in 1995 to the museum’s off-site storage facility, where it remains, at least for the time being.

1905: repainted in crimson livery; 1931 substantial buffers were fitted at each end, dividing the end steps into two, with the aim of reducing any damage or injuries caused by collisions.

Withdrawn as a passenger tram in 1935 and placed in store, where it was used as a mess room. During this period it lost its upper deck seats, central buffers, front steps and hand rails, though some replacement items, including the top-deck seats, were salvaged from sister car 143.

Restored to 1922 conditions to enable it to participate in the tramway’s 75th anniversary celebrations in 1960. At this stage it was equipped with slightly more powerful replacement motors (35 hp BTH B265C) Used for enthusiasts’ tours and special events until presented to the TMS in 1965.
Overhauled in 1975 in preparation for the borough of Blackpool’s centenary celebrations in 1976 and then on active if intermittent service over the next 14 years. Returned to Crich in 1990 and placed in store five years later after a period on display as a static exhibit.

Current status
Has previously been restored but no longer operational and now in need of further restoration; stored off-site
Date started operating at Crich
1965. Has operated for 4 seasons at Crich, most recently in 1970.
Total mileage covered at Crich
890 recorded at Crich plus another 480 recorded at Blackpool in the mid-1980s.
Current location
Off-site storage facility
Future plans