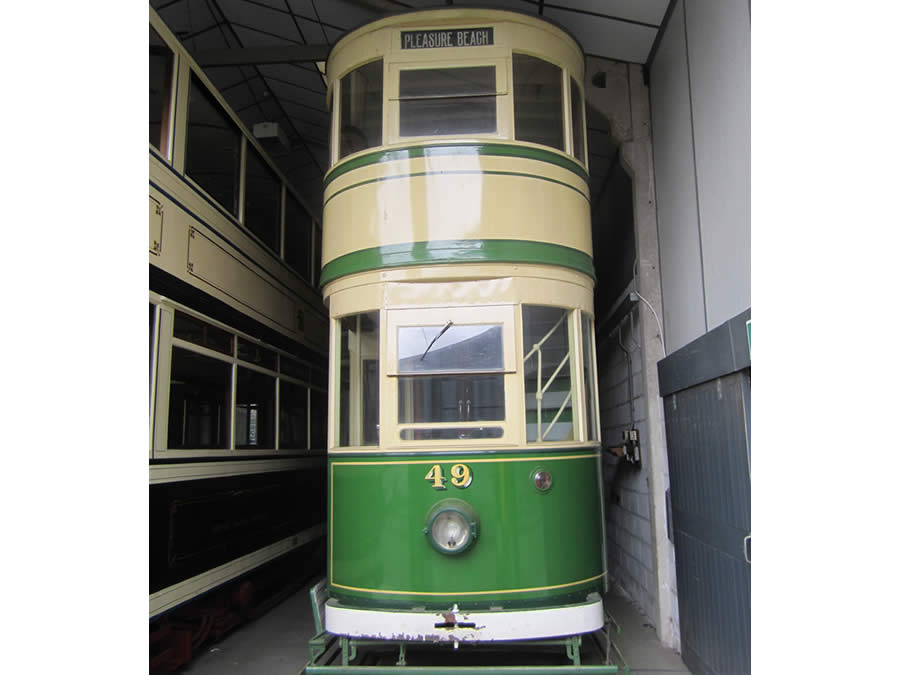 Like its open-balconied stable-mate, Blackpool 40 (also in the collection), number 49 was one of a number of Standard tramcars that augmented the fleet in the early years after Blackpool Corporation Tramway acquired its northern neighbour, the Blackpool and Fleetwood Tramroad in 1920.

Since this was a period of acute financial austerity it was extremely difficult for tramway managers, such as Blackpool’s Mr. Furness, to obtain the capital investment required for more than a handful of new tramcars. The only way of obtaining the additional vehicles that were needed was to engage in a form of ‘creative accountancy’ whereby virtually new trams that were built by the tramway’s own workshops could be designated as ‘rebuilds’ or ‘modernised’ tramcars, the expenditure of which could be drawn from revenue funding instead. For book-keeping purposes, Blackpool 49 was described as a ‘rebuild’ of an earlier tramcar (built by Hurst Nelson, of Motherwell) that dated back to 1902 but in reality the tram inherited very few components from its predecessor apart from a 1912-pattern short top-cover dating back to just before the first world war. The tramcar received a balcony top cover in the late 1920s and the vestibules and balconies themselves were enclosed a few years later in 1930/1. The current green and cream livery also dates back to around this time whereas the red white and teak livery seen on Blackpool 40 depicts the previous livery.

This version of the ‘Blackpool Standard’ design, as illustrated by number 49, represents its final development though it was soon to be rendered obsolete by Blackpool Corporation’s progressive policy of continually modernising and updating its fleet, which included the introduction of a much more streamlined series of vehicles during the 1930s. Even so, the traditional all-weather tramcars still continued to provide reliable service – mainly on the inland Marton route – for many years, though many had been withdrawn by the mid-1950s. Those that remained, including number 49, were given a temporary reprieve around this time, however, since they provided useful service as Promenade extras and also for Illumination Tours. Rather unusually, no fewer than six Blackpool Standards have survived, three of which are in the UK and three in the U.S. Of the two Standards belonging to the Crich Tramway Museum, both have seen active service and number 49 was one of the first tramcars to operate on 6 June 1964, which is when the traction electricity supply was first connected. Since then, Blackpool 49 was a regular performer at Crich and between 1969 and 1992 had covered a total of nearly 18,000 miles. Some time after its arrival at Crich, an opportunity for restoring it presented itself in the guise of the government of the day’s job creation programme in 1976. As is often the way when tramcars that have ‘evolved’ over the years are concerned, this presented a range of possible restoration options. On this occasion, the decision was taken to undertake a limited restoration based on the car’s current guise as a later era fully enclosed Standard tramcar rather than seeking a more extensive – and expensive – reversion to an earlier condition.

For many years the tramcar was one of the stalwarts of the fleet and provided 27 years of almost continual service between 1964 and 1992, during which time there were only two years in which it was not operational. The car has not run in service since then, however, and is currently on display in the Exhibition Hall.

As a technically ‘rebuilt’ tramcar, its predecessor was originally built as an open-topped tramcar without vestibules or canopies, but received a short top cover just before the first world war.
A very substantial “rebuild” in 1924/6 resulted in a virtually new tramcar, with new lower deck and platforms, motors and bogies.
In the late 1920s it received a balcony top-cover and the current more modern controllers replaced the originals (B.T.H. B18). Its vestibules and balconies were enclosed shortly afterwards in 1930/1.
April 1933 repainted in current green and cream livery.
April 1937 wooden seating was replaced by upholstered seats.
March 1938 top deck vestibules fitted.
February 1943 major body repairs at No. 2 end following an accident; re-trucked and re-motored.

Taken to Crich for preservation in December 1962. 1964 entered service at Crich in 1920’s red livery.
May 1973 Disguised as Manchester 327 for the filming of Howard Spring’s ‘Shabby Tiger’ (appearing with Johannesburg 60, which masqueraded as Manchester 717).