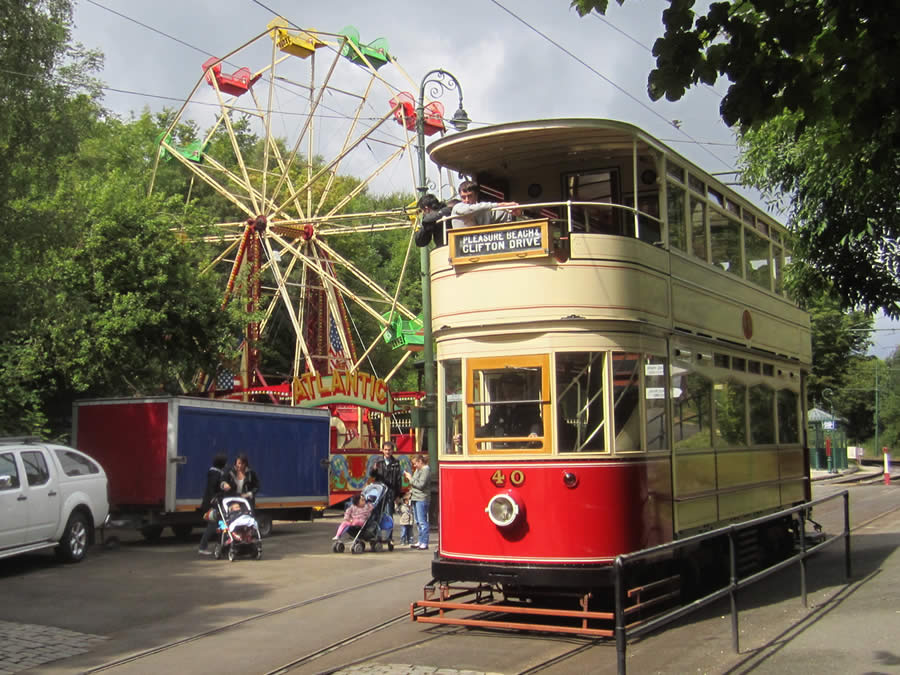 Blackpool 40’s place in the tramway history books is assured by virtue of the fact that this classic ‘Standard’ tramcar design was to be the last of the ‘traditional’ first generation trams to operate in the United Kingdom. By the time it was built, in 1926, Blackpool’s tramway was in a state of considerable upheaval. Six years earlier the tramway had been amalgamated with its northern neighbour, the Blackpool and Fleetwood Tramroad and a programme of track renewal had been completed in 1922-3.

However, Blackpool’s tram fleet was also by now in urgent need of renewal. During the immediate post-war years these needs had intensified as a result of extensive housing development around the inland or town routes, for which many of the existing older ‘sea-front’ tramcars were not so suitable. Hence the quest for a substantial number of economical and reliable all-weather tramcars offering a comfortable ride and at least some protection from the elements.

The mid-1920s were also a period of financial austerity which made it difficult for the tramway manager, Mr Charles Furness, to obtain approval for the purchase of more than a limited number of all- new tramcars though seven completely new Standard tramcars were ordered from Hurst, Nelson of Motherwell.

Approval was much more likely to be given for trams that could be designated as ‘rebuilds’ or ‘replacements’, however, particularly since these could be constructed in-house using the new workshops that had been built at Rigby Road (utilising war-surplus equipment where available). Moreover, such additional trams could also be paid for out of revenue funding without having to draw on the exceedingly limited capital allocation for new trams. This achieved considerable savings for the Corporation to the tune of £400 per tramcar compared with the £1,750 charged by Hurst, Nelson. Taking advantage of this form of ‘creative accountancy’, Number 40 was one of a number of extra trams – 35 in total – that were technically described as ‘rebuilds’ or ‘replacements’ even though they effectively amounted to brand-new Standard trams. All 42 Standards were built to a traditional design and Number 40 (categorised as a ‘replacement’ vehicle) was given a full-length top cover but lacked drivers’ vestibules at this point . Blackpool 40 initially appeared in the then-standard livery of bright red and white with teak varnished waist panels. Originally the tram was equipped with leather seats downstairs, which were intended for better-heeled passengers and wooden seats upstairs for others, including their maid-servants. Drivers’ vestibules were added in 1931.  The green and cream livery was applied in September 1934 and upholstered seats were fitted to the upper deck in November 1936.  Although the tramcar has subsequently been restored to its 1931 condition externally, this does not extend to the interior seating.

In later years the Standards were largely restricted to the inland Marton route and several were decommissioned as new streamlined cars entered into service, though some of the remaining cars were given a temporary reprieve during the mid-1950s when they were pressed into service as promenade extras and for illumination tours. Car number 40 was the last open-balcony tram to operate in Britain by the time of its withdrawal on 12 January 1963 and shortly after this it was transported to Crich (on 3rd – 5th October) to embark on a new career in preservation. After entering service as one of the ‘workhorses’ of the Crich fleet in 1964, the car was given a thorough overhaul in 1983 / 1984, which saw it being largely restored to 1931 external condition, replete with red livery, just in time for it to serve as the flagship tram in Blackpool Tramway’s centenary celebrations of 1985. While at Crich Blackpool 40 has been one of the most intensively used trams of the fleet and by the end of 2017 had covered a total of  43,866 miles: more than any other tramcar in the fleet!

1983 / 1984 complete overhaul and restored to 1931 external condition including red livery with shallow rocker panels but interior seating does not match (should be longitudinal on both sides and covered in red moquette).

Current status
Restored to operational condition but currently undergoing repairs.
Date started operating at Crich
1963. Has operated for over 44 seasons including 2020. Indeed, it has not 'missed' a season since 1983!
Total mileage covered at Crich
45,570. Also clocked up 1,760 miles in Blackpool in 1985
Current location
Depots