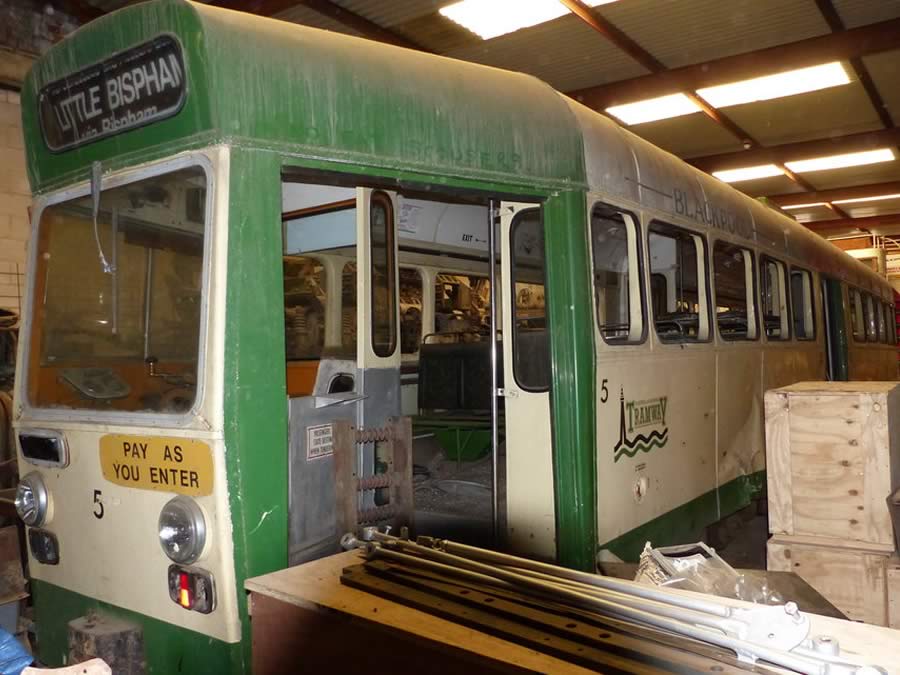 Economic factors played an important role in determining the fate of Britain’s ‘first generation’ tramways.  One significant cause of abandonment was the capital cost associated with replacing worn-out tramcars, track or overhead equipment, but an even more important factor was growing competition from rival modes of transport and, in particular, diesel buses.

The only urban electric tramway in mainland Britain to have maintained a continuous presence from the earliest days of electric traction and into the second generation tramway era was the one operated by Blackpool Corporation.  It owed its survival to a combination of continuing demand from visiting tourists and a willingness on the part of management to update and adapt the fleet over the years.

Blackpool 5 provides a good illustration of the lengths to which the operator was willing to go in order to see off the increased competition posed by changes in diesel bus design and operation.  Indeed, the class of tramcar to which it belongs has even been credited with saving the tramway itself from abandonment at a time when it was facing a precarious financial future in the period following the closure of Britain’s remaining urban first generation tramways.

The tramcar began life in 1934 as one of 45 English Electric central-entrance railcoaches that were originally ordered as part of a radical pre-war modernisation programme.  Initially numbered 221, it was subsequently renumbered 609.  It operated in this guise until it was withdrawn from passenger service in 1965, whereupon it was again renumbered and put to work as a permanent way vehicle 5 until October 1971.

At this point Blackpool Corporation tramway was facing an uncertain future.  Having axed its former inland routes in 1963, patronage of the tramway during the quieter winter months was insufficient to warrant the cost of the regular two-man crew.  Moreover, by this stage rival bus operators had succeeding in drastically reducing their operating costs by dispensing with the services of a conductor and converting their vehicles to ‘one-man-operation’ (or OMO).  They were even offered a grant by the Ministry of Transport covering 50% of the cost of conversion.

So, the tramways department decided to take their rivals on at their own game by successfully applying for the same Department of Transport conversion grant and adapting a number of existing single deck tramcars so that they could also be operated solely by the driver.  After experimenting with a number of other single deck tramcars in the fleet and finding them unsatisfactory, the class of English Electric tramcars to which number 5 belonged was found to be much more suitable.

The conversion process involved an extension of the underframe (increasing the length of the tram from 43 to 49 feet) and replacement of the distinctive streamlined pointed ends with a new tapered end incorporating additional front doors designed for those entering the vehicle.  This enabled the original central doors to be converted into ‘exits’.  The driver was expected to switch to right-hand operation of the (relocated) controller, freeing up his left hand for receiving fares and issuing tickets.  Bus-style back to back seats were installed in the saloon section of the vehicle.

Of the remaining English Electric railcoaches in 1971, only 13 were in a serviceable condition, and number 5 was one of the first to be converted.  OMO cars 1 – 5.were launched on 30th October 1972 (though no. 5 did not enter service until 19th November) and serviced the winter timetable on the Starr Gate to Fleetwood service.  In order to differentiate the OMO cars from ‘regular’ conductor-operated vehicles, the former carried illuminated “Pay as You Enter” signs and were initially turned out in a distinctive ‘plum and custard’ livery.

This was found to fade rapidly, however, so the trams were quickly repainted in an alternative vermilion red and cream livery.  Number 5 was subsequently repainted in a green and cream livery during the winter of 1986/6 and finally received a version of the 1990s fleet livery (also green and cream but with an orange cab) during 1991.  Indeed, it is the only OMO tramcar to have appeared in all four of the liveries applied to this class of tramcar. Although the conversion programme succeeded in its principal aim of reducing operational costs during the winter season and (arguably) securing the future of the tramway itself, there was a price to be paid as the additional length of the tramcars caused the inadequately supported bodies to droop at each end, requiring periodic remedial work, with the additional expense that this entailed, to keep them in operation.

One problem was that the heavy controllers were positioned at the front of the extended body, way beyond the bogie and this unsupported weight caused excessive tyre wear, reducing the tyre life from the 100,000 miles recorded by the railcoaches to just 60,000 miles.  This particular problem was solved by fitting Metalastik rubber suspension to the bogies (as used on London Undergound vehicles), and this extended the tyre life to 150,000 miles.

Maintenance and operational costs were also reduced by switching from trolley poles to pantographs.  For a time OMO 5 ran with an experimental Brecknell Willis single arm pantograph that could be raised and lowered by the driver from the cab (which sounded a buzzer as it left the wire).  However, in 1985 this was replaced by one of the Blackpool’s in-house designed diamond-frame pantographs.

The overall reduction in operational costs achieved by the OMO cars during the lean winter months undoubtedly helped to tide the tramway over during a particularly challenging period.  Nevertheless, they were initially envisaged as a temporary ‘stop-gap’ measure pending the introduction of a new class of ‘Centenary’ tramcars from 1984 onwards that were intended to replace them. Ironically, the Centenary tramcars suffered reliability problems of their own and, as a result, a handful of OMOs including number 5 were reprieved and the latter soldiered on until 1993, when it was finally withdrawn from passenger service.  By this stage the tramcar was in a rather poor state of repair and the discovery of severe platform corrosion proved to be the final straw.

OMO 5 was then retained in storage until 2000, when it was offered to the Tramway Museum Society.  An additional offer by the Fylde Tramway Society to pay for a cosmetic restoration so that the car could be put on display had, reluctantly, to be turned down because of inadequate onsite storage space and, as a result, the tramcar is currently awaiting restoration in the museum’s off-site storage facility.

The tramcar is currently in rather a poor condition following the two decades of heavy usage since its initial conversion, which means that a full restoration is likely to be an expensive and lengthy exercise.  Nevertheless, it represents an interesting phase in the development of Britain’s first generation tramcars, albeit during its ‘twilight’ era.

For some time it enjoyed a unique claim to fame as the only British tramcar in the museum’s collection to have operated a ‘pay-as-you-enter’ service of the kind normally associated with contemporary buses; but this distinction is now shared with Blackpool 762 since the latter’s arrival in 2011.

Withdrawn from passenger service in March 1993 having last run in traffic on 17th February 1993.

Following its withdrawal OMO 5 was stored by Blackpool Transport for a time before moving to the Tramway Museum’s off-site storage facility in 2000, where it has remained since.

The bodywork and underframe are in a poor state of repair so it is awaiting restoration.