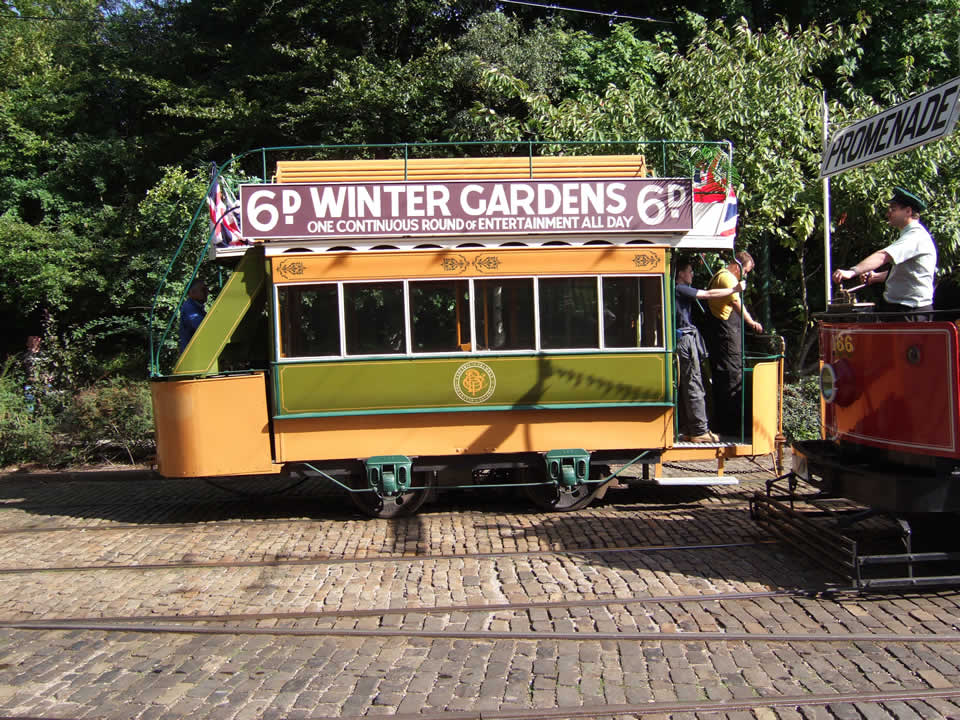 Blackpool Tramways no. 4 is a truly historic tramcar, having been built for Britain’s first electric street tramway, which opened on 29th September 1885. The short line was approximately two miles in length and ran along the promenade. The power for the tramcars was provided by means of a ‘conduit’ system whereby the electric current was carried in a specially constructed channel under the roadway instead of using overhead power lines.

The tram was unusually small for a double decker, being designed to accommodate just 16 passengers on the lower deck and a similar number on the back-to-back “knifeboard” seating arrangement on the upper deck – roughly the same as contemporary double deck horse trams. In appearance as well as capacity, the tramcar closely resembled the horse trams from which it was evidently derived. The tramcar was one of six ‘winter’ cars constructed for the tramway’s ten-car fleet, which meant that its lower saloon was enclosed, though it was actually operated throughout the year.

Show more
Number 4 was powered by a single relatively modest 7 hp motor. This would probably have been adequate for a vehicle of this size on a level tramway even when loaded but, somewhat optimistically, perhaps, it was originally intended to be used with one of two non-motorised trailers that were supplied at the same time. In the event, however, the company neglected to obtain advance approval for trailer operation and, by the time they applied, consent was refused.

Blackpool Corporation assumed control of the tramway in 1892 and began to expand both the track length and the size of the fleet. It also switched the power supply from conduit to overhead wires in order to resolve the electrical problems that were frequently caused by wind-blown sand.

Shortly after the Corporation take-over number 4 was reconstructed with separate trucks in 1894. It was also fitted with a trolley pole that, for aesthetic reasons, was mounted on the seaward side of the car.  By this stage, however, the tramcar was beginning to show its age and also its limitations as its limited capacity was increasingly seen as a problem once passenger numbers increased.

As a result, the tram came to be used as a works car during the winter seasons from 1899 onwards and this change of role became permanent in 1905. Arguably, its most important modification was the addition of an extending tower in 1912, which converted the tram into an overhead inspection and repair car and, in so doing, helped to secure its long-term survival.

During the first world war the tramcar was assigned a new role delivering bread for the military camp based at Squires Gate and acquired a pair of side doors for this purpose, which subsequently enabled it to be used as a stores van.  In later years it became a snowplough. Number 4 was eventually replaced as a works car in 1934 but, instead of being scrapped, this multi-tasking tramcar was put in store for 25 years at the back of Bispham depot. Eventually it was restored (inaccurately, in a red and white livery, as passenger tram ‘number 1’) to take pride of place at the head of the tramway’s 75th anniversary procession on 29th September 1960. The tram was presented to the Tramway Museum Society in 1963 but, because the site at Crich was still in the very early stage of development, it was initially displayed at the Museum of British Transport in Clapham until that museum closed in 1973. It was then placed in store until 1979, when it was put on display in the old exhibition hall at Crich.

With the centenary anniversary of Blackpool’s tramway pending in 1985, a more thorough restoration of the car took place in which it was returned as far as possible to its 1885 condition (and its original number) by removing some of the modifications it had received before its retirement from passenger service.  Having been restored to its former glory, the tramcar took part in the centenary celebrations in its home town of Blackpool during September 1985. Although it was not possible (or practicable) to return it to conduit operation, the opportunity was taken to equip it with a motor and batteries that enabled it to operate again without the need to replace the trolley pole and mast.

So, visually, at least, the tramcar looks as it would have done before its conversion to overhead traction.  It has even reverted to its original configuration in which a single electric motor powers one of the axles by means of a chain.

It wasn’t possible to precisely recreate the original type of control system but, rather ingeniously, a modern version of the same type of system has been adapted using equipment that was developed by the Electricity Council in the early 1980s for use with battery electric cars.

Consequently, one of the oldest tramcars in the collection at Crich paradoxically sports one of the most modern control systems! Following its return from Blackpool in 1985, the tramcar then reverted for the next two decades to its former role as a static exhibit in the Great Exhibition Hall at Crich.  With the 50th anniversary of the founding of the Tramway Museum Society looming in 2005, however, it was successfully coaxed back into operation to enable it to perform on this important occasion and on one or two subsequent outings in the same year.

N.B. Blackpool 4’s otherwise identical twin car (number 3) was also interesting in that it was initially fitted out rather elaborately as a director’s car, which was not uncommon in the early years of British tramways. Sadly, the body of this tram eventually ended up as a football dressing room on South Shore before being scrapped in 1934.

1894 renovation involving new ECC truck, worm gear drive and handbrakes. 1898 a pair of 27 hp GE52 motors and K10 controllers were fitted experimentally.
1899 conversion to overhead wiring. From this date no. 4 was used as a works car during winter seasons and assumed this role permanently from around 1905.
Addition of extending tower in 1912, converting the tram into an overhead inspection and repair car.

Withdrawn as a passenger tram in 1905 but continued in use as a works car until 1934, when it was placed in store.

Stored at the back of Bispham Road depot until 25 February 1960 when it was restored as a passenger car to participate in the tramway’s 75th anniversary celebrations.
Once in preservation, the tramcar was initially displayed at the Museum of British Transport in Clapham. Following its closure, it was then placed in the museum’s off-site storage facility in March 1973, where it remained until 5/4/1979, when it was finally brought to Crich.

See above. A more extensive restoration took place in April 1985, which restored the car more fully to its original condition (excepting its conduit system of current collection).
This involved a reversion to the tram’s original configuration in which a single electric motor (now 6 hp) drove one of the axles via a chain. The car has also been fitted with a modern form of the field control system that early electric traction pioneers utilised at the time of its construction. The work (including painting the tramcar in its current livery) was carried out at the Manchester Museum of Science and Industry with help from a variety of other organisations.