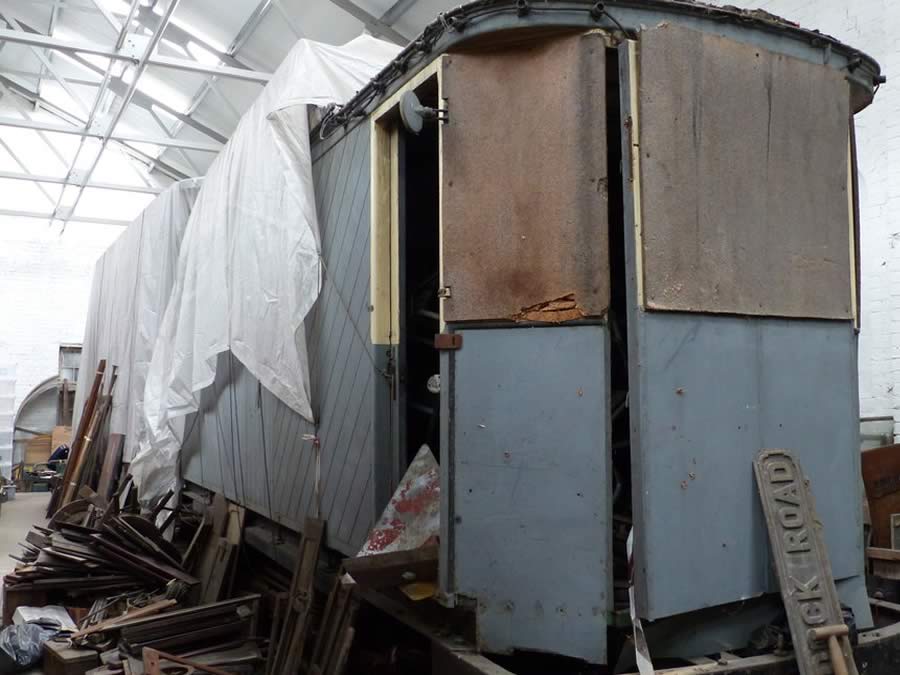 Tram rail may look tough and resilient but is subjected to enormous stresses and pressures, particularly on bends and at intersections, where points enable tramcars to switch from one track to another.  Another source of pressure comes from heavy braking by tramcars, which can cause the wheels to lock.  One effect of such pressure is to cause the rail to wear unevenly, resulting in corrugations or ripples that make for a noisy and uneven ride.

Tramway operators dealt with such problems by employing railgrinders, which consisted of power-driven tram trucks that were fitted with carborundum blocks.  These could be brought into contact with the rails and put under pressure in order to remove the corrugations.  Because of the heat that was generated by the process, the rail grinder was also equipped with a large water tank that was normally housed within a wooden body.

Small jets of water were directed onto the rail as the tram passed slowly over it.  The task of maintaining the track in good condition was a slow and laborious one as only 300 yards of single track could be resurfaced in an average shift (usually at night).  Nevertheless, it was the only way of preventing excessive vibrations from building up, which were a major cause of wear and, ultimately, disintegration if not attended to. Blackpool railgrinder no. 2 was one of two such vehicles that were built by the corporation’s Rigby Road workshops, both of which have survived into preservation.  As was common practice with works vehicles, the tramcar was provided with redundant equipment that was rescued from scrapped passenger trams.  Its truck had previously formed part of a specially illuminated feature tram (depicting a ‘Rustic Thatched Cottage’) and, before that, a regular passenger tram (No. 33) dating back to 1901. The ‘new’ works car entered service in a green livery on 25th May 1935 and was equipped with snow ploughs in November of the same year.  The main difference between the two rail grinders was that No, 2 had large sliding doors on one side only, whereas No. 1 (built in 1928) had such doors on both sides, which made it more suitable as a ‘stores’ car, for carrying bulky items. Following a major contraction of the Blackpool tramway in the early 1960s, when the inland routes were abandoned, there was less track to be maintained and, as a result, No. 2 was taken out of service in October 1965 and presented to the Tramway Museum Society, arriving at Crich two months later. To begin with, the tramcar was used at Crich as a works vehicle, though its water tanks were removed and replaced by generating equipment in the form of a diesel bus engine coupled to a trolley bus motor.  This enabled the vehicle to serve as a standby mobile generator in the days before a reliable source of overhead power had been set up.  The tramcar was also repainted in a grey livery and equipped with illuminated placards and strings of lights for its appearances in the once-annual August Extravaganzas.

Eventually, the establishment of a secure source of electrical current to power the overhead cables rendered the tramcar redundant, and in March 1975 it was put into long-term storage and moved off-site.  Over the years since its arrival at Crich, various components have been pressed into service during the restoration of other tramcars, including Manchester 765 (electrical equipment), and Chesterfield.7 (its replacement truck, though it has now been reunited with the one it originally came with).

The other Blackpool rail grinder (originally number 1, though subsequently renumbered as 752 for a time) also found its way into preservation in 2008 – just before Blackpool’s original first generation tramway was upgraded into a second generation system in 2012 – and now operates as a works tram on the Heaton Park tramway in Manchester.

Moved to Crich in December 1965; initially used as a works car and also a mobile generator for a time. Also appeared as an illuminated tramcar during the annual August extravaganzas.
Placed in off-site storage, March 1975

Converted to generator car while at Crich which resulted in a number of modifications. Current trolley gantry is not original