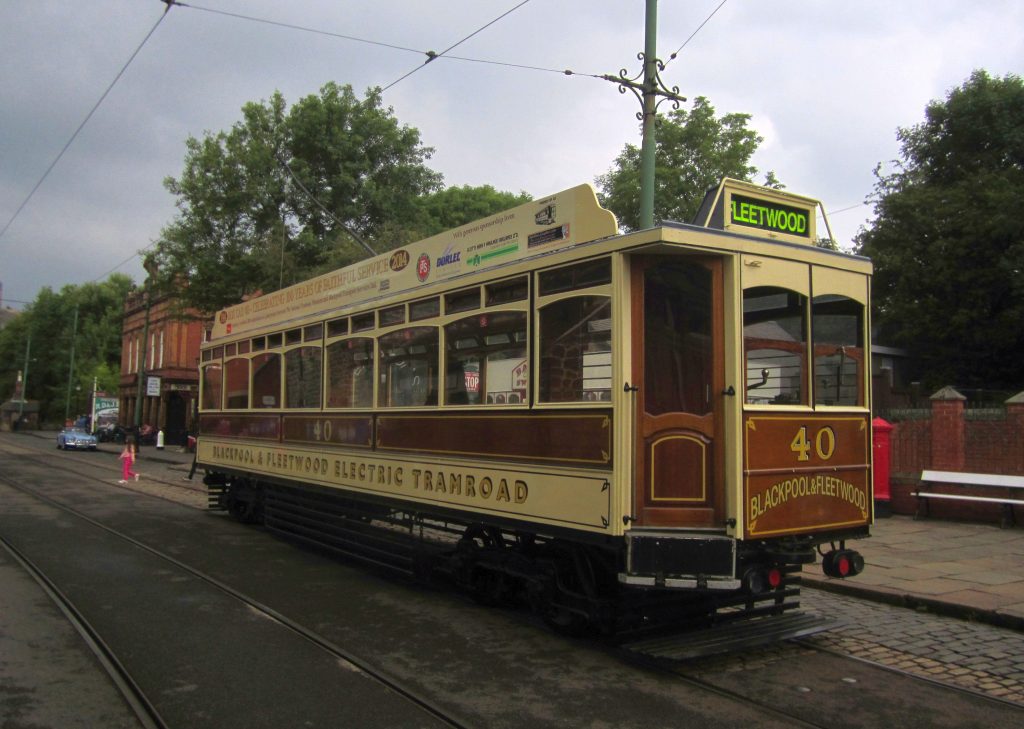 In the early years of electric tramways it was not uncommon for operators to alternate between ‘open’ tramcars for the summer season and ‘closed’ saloon type tramcars in the winter or when conditions were inclement. Blackpool and Fleetwood No. 40 is a good example of a ‘saloon’-bodied enclosed tramcar which for many years performed a seasonal ‘double act’ with open-bodied toast-racks like Blackpool and Fleetwood No. 2 (also in the museum’s collection). Because of its rectangular shape, it is often referred to as a ‘box car’. Although number 40 turned 100 in 2014, this design of tramcar dates back even earlier, almost to the dawn of the electric tramway era. Indeed, number 40 joined an earlier batch of virtually identical tramcars that the Blackpool and Fleetwood Tramroad ordered from the same manufacturer around the turn of the century.

The main difference between this and its predecessors was the insertion of opening quarter light windows for improved ventilation and the loss of the clerestory roof (a raised section of roof with small-sized vertical windows that admitted a bit more light to the interior).

Rather more surprising was the retention of the corner entrance, a decidedly archaic design feature that dated back to the days of steam tramways. This did not matter so much while the tramway was effectively an ‘inter-urban’ with little call for intermediate stops between the two main urban centres of population. However, the gradual infilling of the previously undeveloped hinterland exposed a rather serious design fault since the narrow corner entrances made for slow loading and unloading times. The entrance doors themselves were a later addition that were installed at the instigation of the drivers, who may have felt rather too exposed to Blackpool’s bracing breezes!

In the early years the tram operated from the Bispham depot and was effectively confined to the Fleetwood tramroad since the promenade section was not physically connected to the neighbouring tramway in Blackpool. In 1920, however, Blackpool Corporation acquired its northern neighbour (for £284,000, which is equivalent to £9,658,847 today) and joined the two systems up on the seafront at the Gynn for the first time. After amalgamating the two systems number 40 was renumbered as 114 and equipped at the same time with electric head and tail lights in place of the original railway-style oil lamps. With its wooden bench seats, narrow entrances and dated styling, the tram was now beginning to show its age, particularly in comparison with some of the newer vehicles being introduced by rival operators such as Lytham St Annes to the south of Blackpool. Upholstered seats were fitted in 1926 and the more powerful motors with which it was equipped in 1928 made it, for a time, the fastest tram in the Blackpool fleet.

Following the arrival of more modern trams such as 167, (also in the collection), however, the older ‘Box Cars’ were all withdrawn by April 1934 but the four newer ones including 114 were retained as extras for another three summers.  Indeed, 114 was repainted in the same month in the newly introduced green and cream livery and continued in service until the end of the 1936 season when all four newer ‘Box Cars’ were withdrawn from the passenger fleet.  No. 114 was the only one to survive, becoming work car no. 5, which operated out of Copse Road, until 1954. During this period of ‘active retirement’, Box 114 helped in clearing the worst snowfall in Blackpool’s history, which began falling on 27 January 1940 and caused drifts so deep that 10 trams had to be abandoned. Coupled to snow plough 128 (an old crossbench car) box 40 helped to shift the snowdrifts and rescue the stranded tramcars. Its final duties as part of Blackpool’s operational fleet consisted of towing the tower wagon during the replacement of the overhead wiring between Cleveleys and Fleetwood after which it was effectively redundant. A new lease of life beckoned as a ‘heritage tram’, however, as the tram was eventually restored as a passenger vehicle with its original company livery and number in time for Blackpool tramways’ 75th anniversary in 1960. Shortly after this, the tram was generously donated to the fledgling tramway museum at Crich, where it arrived on 5 October 1963.

Shortly after this, B&F 40 became one of the first trams to provide a passenger service at Crich following its electrification in 1964 and initially featured in the running schedules more than any other tram at the museum.

Some early footage of B&F 40 in operation during the early days at Crich can be seen in a British Pathé newsreel that was filmed in 1964 by following the link to:
http://www.britishpathe.com/video/trams-and-tram-museum/query/tram

It did experience a number of derailments, however, and this resulted in the tram being withdrawn in 1965 before being placed in storage in 1970.

Not for the first time in its existence, it subsequently found a new lease of life as an operational heritage tram when it was transferred in 1979 to the recently established Heaton Park tramway. Before it could enter service it was given an overhaul which also provided an opportunity to rectify an original structural fault affecting the underframe which was almost certainly responsible for its tendency to derail while at Crich.

After five years of passenger operations at Heaton Park, the tram then returned to its native Blackpool in 1988 to help celebrate the 90th anniversary of the Blackpool & Fleetwood Tramroad, but in order to bring it up to roadworthy standards an expensive overhaul was required, the cost of which was met by acquiring sponsorship from the Fleetwood firm of Fishermen’s Friend, who advertised their product while the tram was in Blackpool. The next 3 seasons saw 40 operating on its home territory once more with the remaining vintage tramcars.

It returned to Crich in 1991 but five years later found itself back in Blackpool on long-term loan as part of the tramway’s heritage fleet, where it remained in service until 2014.

The celebration of 50 years of electric traction at Crich in September 2014 provided a timely opportunity for another return visit to the tramway museum, which took place in July after another extensive overhaul conducted jointly by the museum and Blackpool Transport Services. Fittingly, this brief sojourn to its official home base coincided with its own centenary year.  After that, the tramcar  returned on long-term loan to Blackpool, where it rejoined the tramway’s operational heritage fleet once more.

Less than five years later, however, another change of scenery beckoned for this much-travelled tramcar.  In March 2019, it travelled from Blackpool to Beamish open air museum to take part in the Great North Steam Fair in April, and remained there for the rest of the summer. 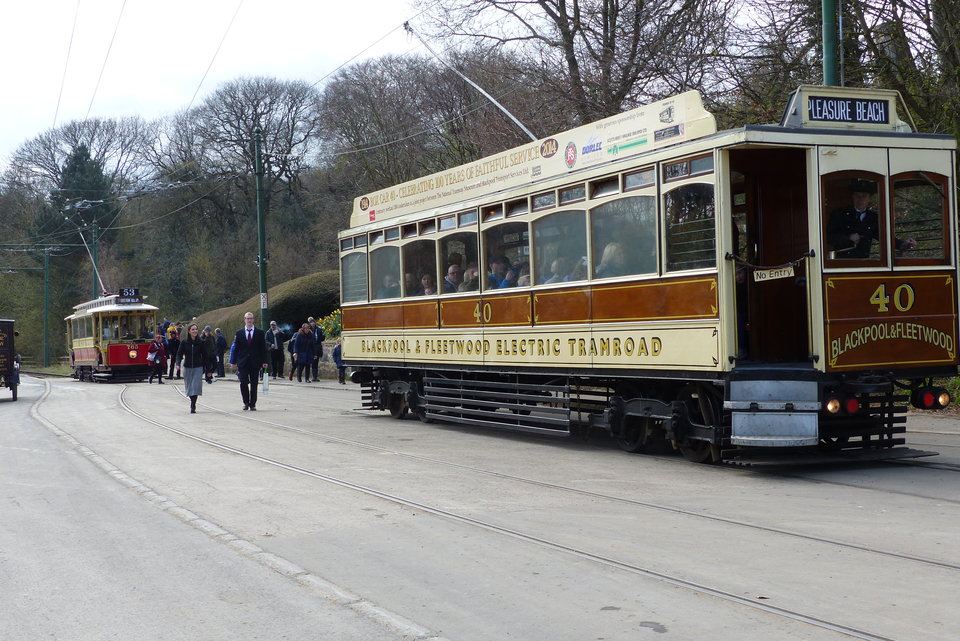 B&F 40 in service during the Great North Steam Fair at Beamish on 12th April 2019 with Manchester 765 – another former Crich resident – in the background. Photo: Jim Dignan

On 6th September, it returned once again to Crich in time for the “Crich Sixtieth Anniversary” event.  This time, its homecoming looks set to mark the end of its role as a ‘roving ambassador’ for the museum, at least for the time being, so visitors to Crich should  expect to see more of this iconic  tramcar from September onwards.

Renumbered as 114 when the tramway was taken over by Blackpool Corporation Tramways in 1920 and original American-style paraffin lamp at the front replaced by a more orthodox electric headlamp. Repainted in Blackpool Corporation’s red-and-white livery.
1926 original wooden seating replaced with upholstered seats and central partition in saloon removed. B18 controller replaced with more modern B510 version around this time.
In 1928 it was equipped with more powerful motors

Withdrawn from passenger service on 10 October 1936 and around 1942 renumbered as works car no. 5 and repainted in all-over green.

Used as works car until at least 1954 after which it towed the tower wagon for a time while the section between Cleveleys and Fleetwood was rewired. It may have remained in use as a works car until 1957/8.

Repainted in its original livery and partly restored as passenger tram to celebrate 75 years of Blackpool Tramways in 1960.(retaining upholstered seats and upgraded motors).
Donated to Tramway Museum Society in 1963 and ran at Crich in the early years before being placed in store in 1970.
Moved to Heaton Park and restored to operational service.
Returned to Blackpool in 1988 and again in 1996 for the Tramroad’s 90th year and centenary celebrations respectively

Current status
Restored to operational condition. Currently on long-term loan to Blackpool Transport Services. Due to be loaned to Beamish Museum of the North during 2019 before returning to Crich in September 2019
Date started operating at Crich
1963 for 2 years, then briefly in 2014
Total mileage covered at Crich
778 in 2 seasons (including 2019) since 2014. Early mileage at Crich not recorded. Has operated on other tramways during 25 seasons but mileage unknown. However, its estimated mileage at Blackpool was 2,522 during the three seasons 2016-2018 inclusive.
Current location
Blackpool