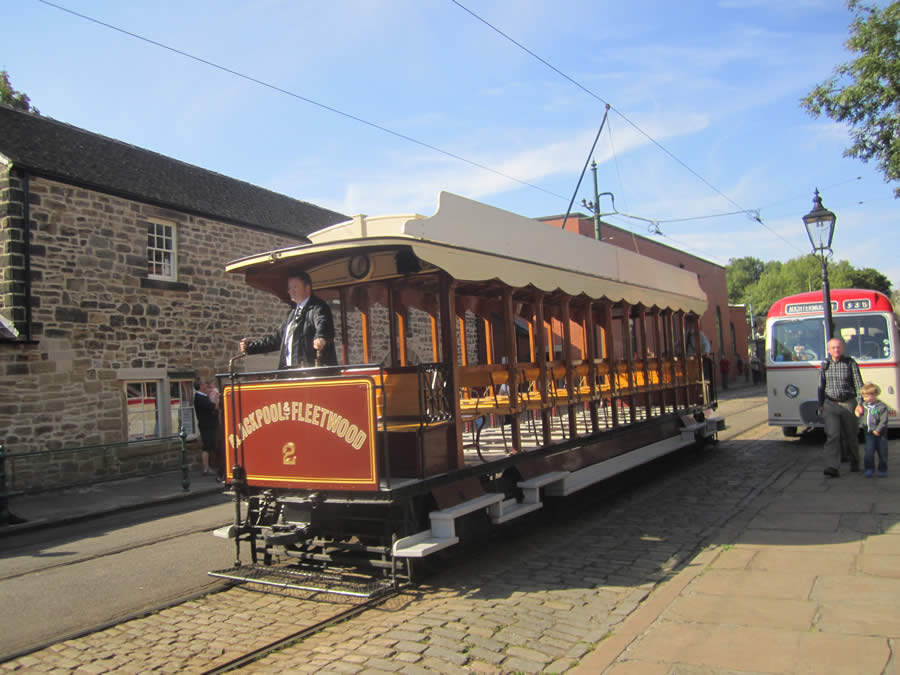 When the Blackpool & Fleetwood tramway opened, in 1898, it was more like a North-American inter-urban service as the two separate towns had relatively little habitation between them – very different from today’s urban sprawl. For many years the tramway itself was physically separate from its southern neighbour’s in Blackpool. As a relatively high capacity single deck ‘toast-rack’ car, Blackpool & Fleetwood 2 was well-suited for such a service and must have offered excellent views of the extensive coastal scenery. In its early days the operation of the tramroad more closely resembled a railway than a conventional street tramway; signalling involved the use of red and green flags and the tramcars themselves originally carried American-style oil lamps in place of the more typical electric headlights.

The tramcar was originally designed to run with a trailer and a fleet of 30 motorised trams with an equal number of trailers was initially envisaged, though only 3 trailers were delivered and they only operated during the summer months for a relatively short period (1898-1902). In 1899 one of the trailers was involved in an accident and it is believed that the use of trailers was subsequently considered to be unsuitable on the street tramway sections in Blackpool and Fleetwood itself, causing the original plans to be abandoned and the three existing trailers to be motorised in 1907. Another distinctive claim to fame is that the tram also carried the Royal Mail for many years – in specially designed ornate letter boxes affixed to the tramcars at first, and later in sacks, once proper pillar boxes had been installed at the Tramroad stations- one of the few tramcars at Crich to have done so.

[A British Pathé newsreel dating from 1925 shows a mailbox in operation on Liverpool Corporation’s tramway. This sequence can be viewed by visiting the British Pathé news website at the following link: http://www.britishpathe.com/video/other-tramways-please-note-yellow-tint/query/tram]

On 1 January 1920 the tram became part of the Blackpool fleet when the company itself was acquired by Blackpool Borough, and this resulted in it being renumbered (as 127) and repainted in Blackpool’s red and cream livery. Shortly afterwards the two systems were connected and this enabled the tram to operate along Blackpool promenade for the first time. Gradually, however, the process of urban development saw the creation of many intermediate stops, and the gradual introduction of more modern-looking and comfortably appointed tramcars during the 1930s rendered the open ‘cross-bench’ cars such as 127 increasingly anachronistic. 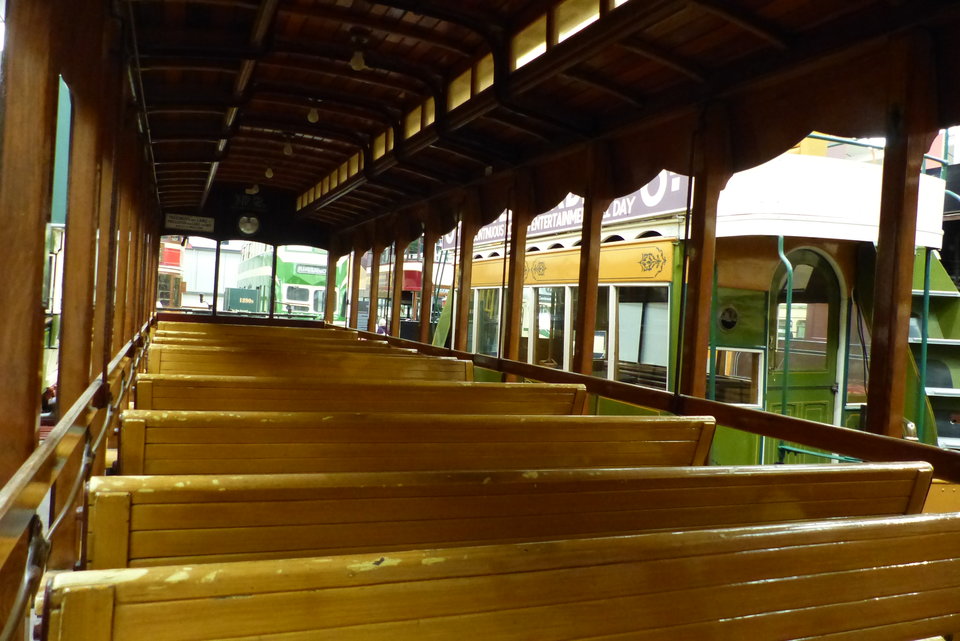 It ran its final service as a passenger tram on 22 October 1938 and, after a year spent in storage, was confined to a much more mundane role ferrying workmen up and down the line on repair jobs until at least 1951. The toast-rack design was quite well suited for this new role, however, as it enabled the tram to be used as a mobile bike rack for the benefit of the workforce.  The insertion of pieces of rail across the car floor also enabled the tramcar to carry lengths of tram rail alongside the works car when necessary.

Another extremely important role to which the tramcar was assigned in 1939 was to act as a snowplough and only a few months later it and a similarly adapted sister car were called upon to deal with the aftermath of the most severe snowstorm ever experienced by the tramway on 27 January 1940. This resulted in the complete abandonment of no fewer than ten tramcars in massive drifts at various locations around the system. Despite 127’s heroic endeavours it took no fewer than seven days to rescue the stranded tramcars and finally clear the final section of the tramway on South Promenade.

Number 127’s demotion to a works car almost certainly secured its long-term survival, however, for when Blackpool tramway began preparations for its 75th anniversary celebrations in 1960, the tram was restored to its original livery and brought back once again into the limelight. The tram was later presented to the Tramway Museum Society and had the distinction of being the first car in the museum to run under the newly erected overhead wires at Crich on 6 June 1964. It was also the first electric tramcar at the museum to operate in passenger service, an event that took place on 5th July 1964.

Since then it has led an active life at Crich, having run in most years with only occasional brief spells out of action.  The tramcar has also been back to Blackpool on a number of occasions, most recently to celebrate Blackpool Tramway’s 125th anniversary celebration in September 2010. By 2012, however, time had taken its toll and, with its motors in a fragile condition, the tramcar was in urgent need of an overhaul.  With an important celebration looming in a couple of years’ time, it was decided to withdraw it temporarily from service so that it would be available to participate in the 50th anniversary of the start of electric tramcar operations at Crich. 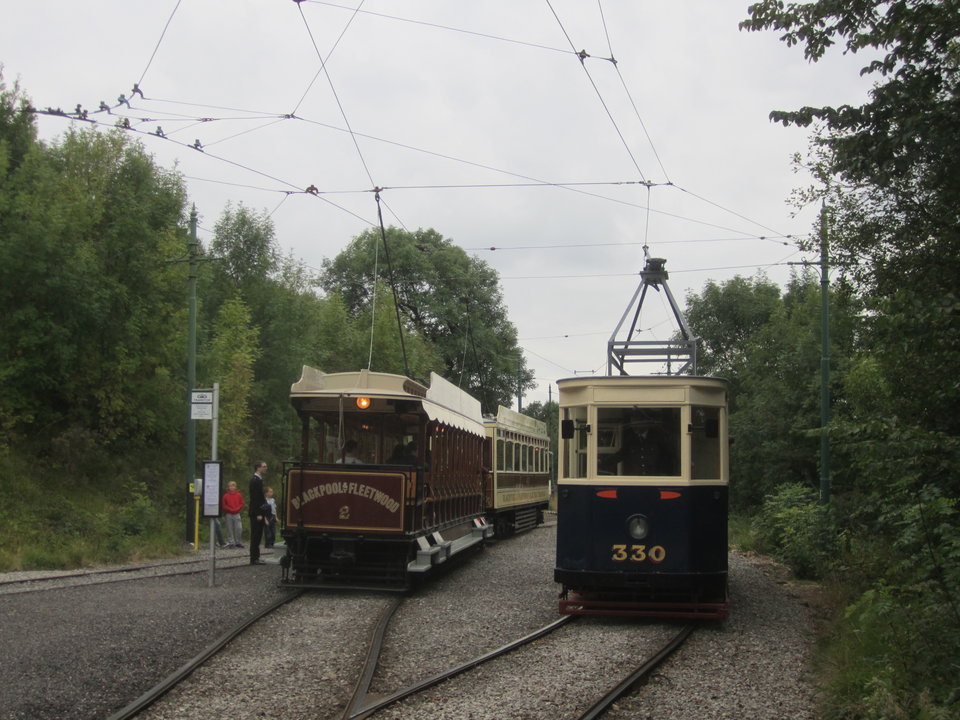 Blackpool & Fleetwood 2 on one of its last outings before its withdrawal pending an overhaul. 13/9/2014. Photo: Jim Dignan

As the inaugural tramcar of the new ‘electric era’ at Crich, it was fitting that no. 2 was able to help commemorate this auspicious event, which was celebrated in style in September 2014.  Once it was over, the tram had earned a well-deserved break from operational service and is now on display in the Exhibition Hall until time and space in the workshop can be found for a major overhaul. 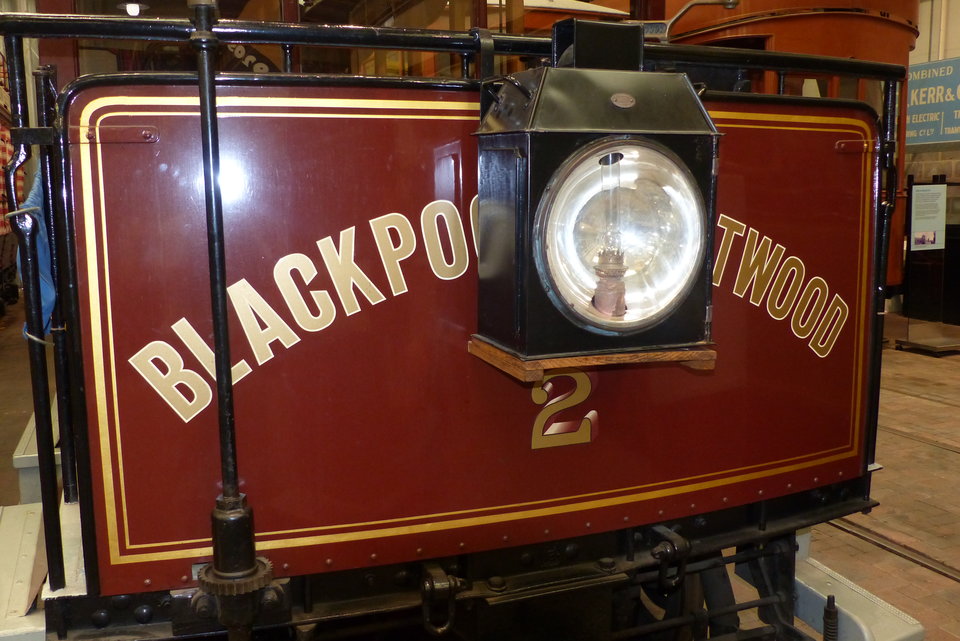 Since taking up residence in the Exhibition Hall, B&F 2 has acquired an authentic looking oil lamp of the kind that it would originally have carried. Photo: Jim Dignan, 28/6/2018

In 2018, this venerable tramcar – the third oldest electric tramcar in the collection – reached its 120th birthday.  To celebrate this event, it was temporarily recommissioned for a few trips during the ‘Simply Trams’ event that took place on 22nd August.

Used as works car/snowplough until at least 1951

Given a cosmetic restoration in its original livery to celebrate 75 years of Blackpool Tramways in 1960 Ownership transferred to Crich Tramway Museum in 1963.

Current status
Restored in operational condition. but not currently commissioned for service.
Date started operating at Crich
1964; has operated in 42 seasons, most recently for a brief period in 2018
Total mileage covered at Crich
22,647
Current location
Exhibition Hall
Future plans

Part of the operational fleet but not currently commissioned as it is in need of an overhaul.