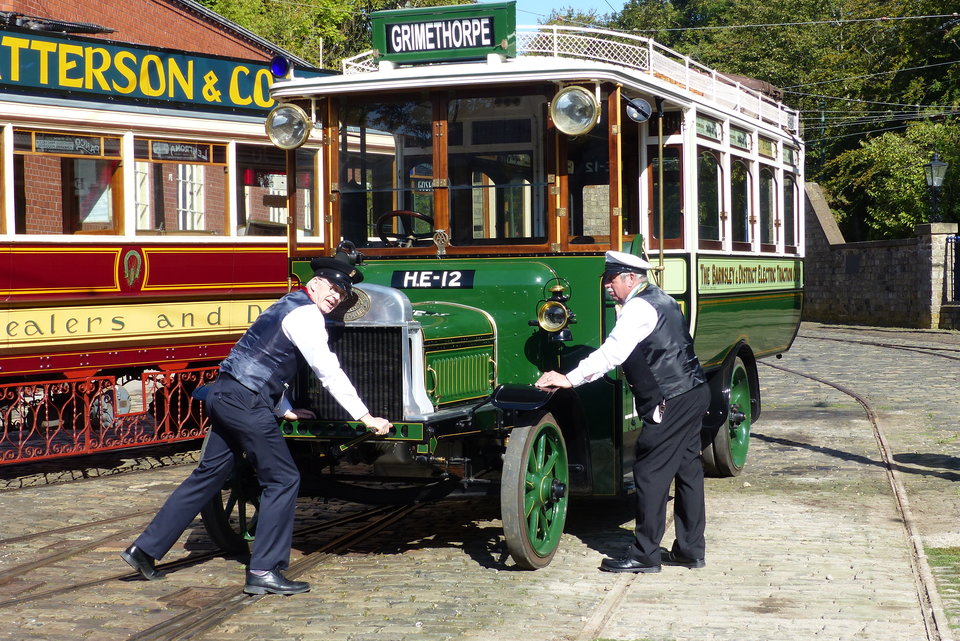 Most of Britain’s first-generation electric tramway networks were owned and operated by local authorities and were thus confined to a particular geographical area, but not all of them.  One exception was Barnsley & District Electric Traction Company, which formed part of an extensive privately-owned conglomerate – British Electric Traction Company – that operated numerous tramways across the British Isles and also overseas.

By 1906 the parent company operated fifteen percent of all British tramways.  Indeed, for a time it was the largest privately-owned tramway operator in the British Isles, having gained control of 34 tramway systems throughout the country, including two in London.

Although Barnsley & District Electric Traction was a relatively small and insignificant cog in this much larger enterprise, it nevertheless played an important role in the replacement of trams by motor buses, not only in Barnsley but also throughout the extensive parent company network.  The fact that one of its early motor buses has survived into preservation thus helps to illustrate an important chapter in the history of Britain’s first-generation tramways.

Barnsley’s tramway was a small standard gauge system just under three miles in extent that opened on 7th November 1902 with a fleet of 10 Brush-built four-wheeled double-deck tramcars.  A further two trams from this order were delivered the following year and these were later joined by a small single-deck tram of a type known as a demi-car. 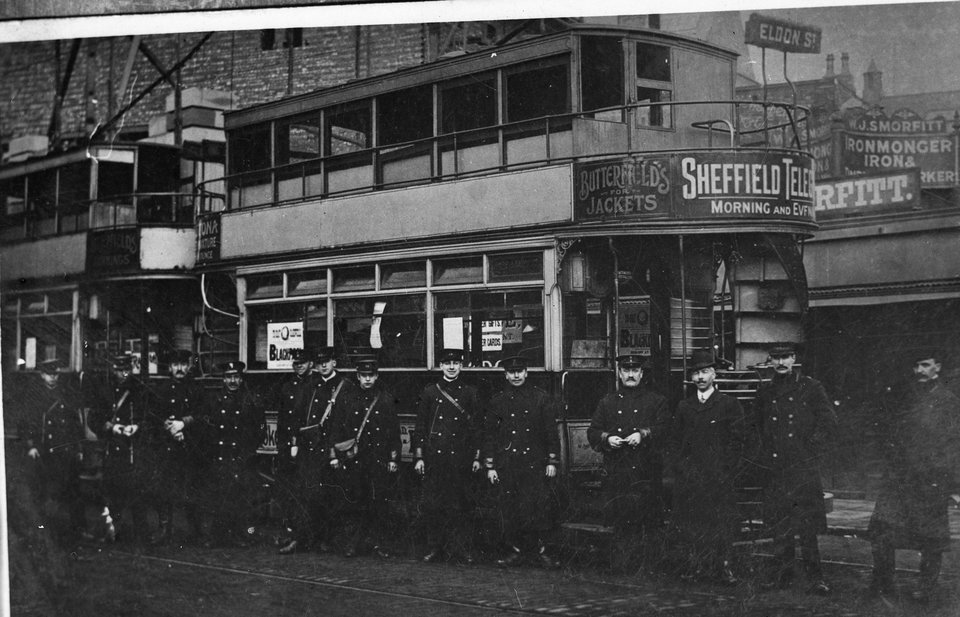 The company had intended to extend the system and had obtained authorisation to construct a number of other lines.  Indeed, its parent company (British Electric Traction Company) had initially envisaged an even more extensive network of electric tramways extending far out into rural areas and linking, where possible, adjoining cities.

As was so often the case, however, Barnsley’s more modest expansion ambitions were thwarted, in part, by a competitor – in this case the Great Central Railway Company.  It refused to allow tramlines to extend across its own tracks at the Worsbrough level crossing, which put paid to the proposed Hoyland route.  The company’s interest in developing other proposed routes subsequently waned when it came under pressure from local councils to cut its fares, which would have undermined their profitability.

Barnsley’s inability, or unwillingness, to extend its existing tram network meant that only two of the six main roads radiating from the town were ever served by tramcars.  So, the company’s thoughts then turned to the possible use of early petrol-engined buses to act as ‘feeders’ for those lines that it had constructed.  Initially, the tram company bought five single deck petrol-engined buses, in 1913, to test their feasibility; and it subsequently acquired a further fifteen similar vehicles.

The experiment must have been deemed a success as several of these buses were subsequently sold or hired out on trial to other members of the parent BET group, which ultimately decided to phase out all of its trams in favour of buses throughout the entire network.  This small-scale local initiative was thus to have profound implications for the future of Britain’s tramways in general.

Barnsley & District Combination Car No. 5 was the last one of the original batch of five motor buses that were bought at a cost of £823 apiece, and was completed in May 1913.  The body was built by Brush Electrical Engineering of Loughborough, a company that is better known as a tramcar manufacturer and, indeed, was built to tramway specifications in a style that is known as a “combination car” because it offered segregated accommodation for smoking and non-smoking passengers.  Brush called the style of body “The Falcon”, which was also the company emblem and the name of its main factory.. 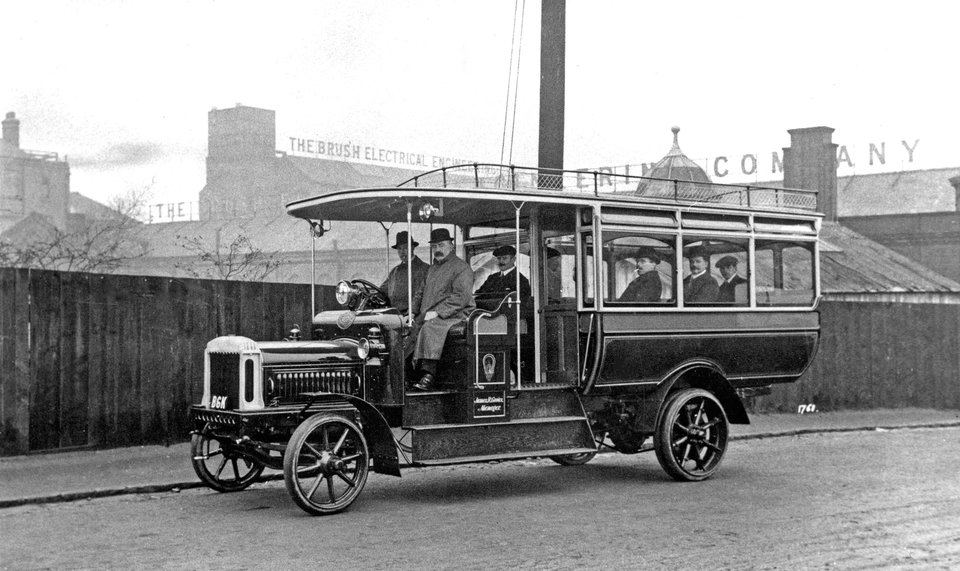 First experiment with a Brush-bodied Leyland ST belonging to Worcestershire Electric Traction. Photographed outside the Falcon Works in Loughborough in December 1911. Photograph courtesy of the Mike Sutcliffe collection.

Preserved tramcar Manchester 765, which was also built in 1913, is a very rare surviving example of a “combination car” tramcar that likewise features an enclosed saloon for non-smokers and, in its case, open compartments at either end for smokers.  This tramcar was also resident at Crich for a time during the early 1960s but now normally resides at the Heaton Park tramway in Manchester. 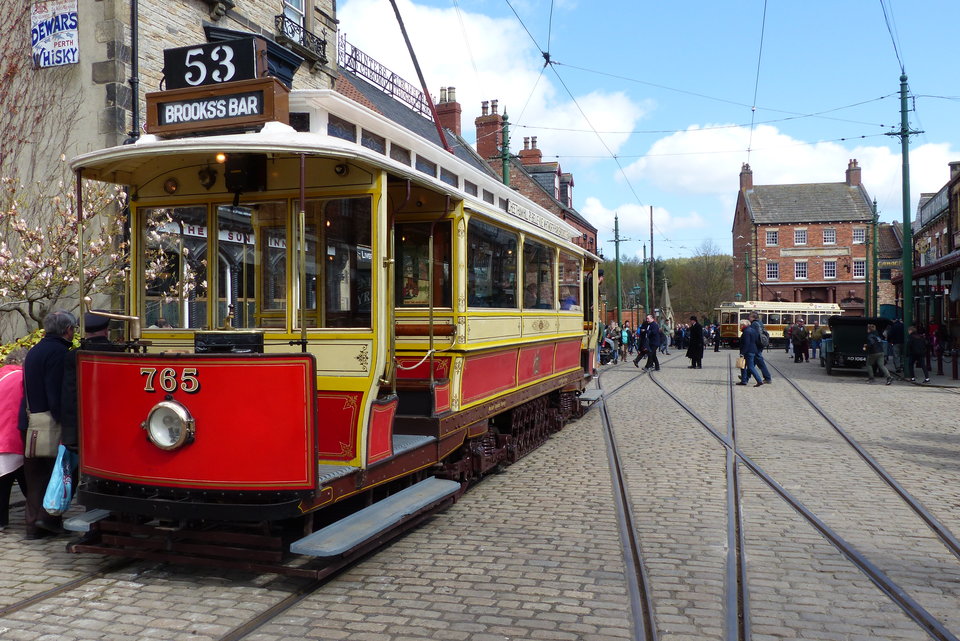 Some of the early tramcars operated by Glasgow Corporation were built to a somewhat similar specification.  Known as “Room and Kitchen cars”, they incorporated a central loading platform with access to an enclosed non-smoking saloon at one end of the tram and another open saloon – equipped with waterproof blinds – for smokers.  One such car – number 672 – survives and can be seen in the Glasgow Riverside Museum, having been restored to its original condition.

The Barnsley “combination car” has 27 seats that are accessed via a front entrance and it also features an unusual full-length external luggage area that is accessed by means of a ladder that is located behind the driver’s cab.  The vehicle also has electric lighting, including inside the saloon, which was another very unusual feature for buses from this era.  Yet another distinctive feature is that the side windows are removable, the bays being equipped with roller blinds that could be pulled down in wet weather when the windows were not in place. 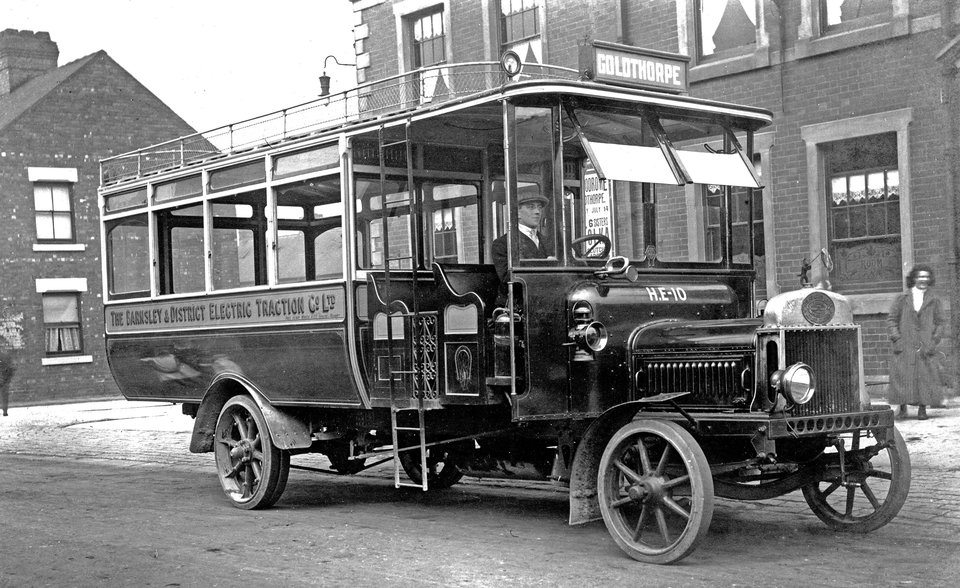 An early photograph of one of the early Barnsley combination cars (HE 10) clearly shows the ladder giving access to the roof-mounted luggage rack. Photograph courtesy of Mike Sutcliffe’s collection.

Registered HE 12, its chassis was built by Leyland Motors as was the S3 4-cylinder, 5.2 litre petrol engine that generated 30 horse power.  The engine was also built to the then modern “L” head design with valves on one side and an oil pump that provided forced lubrication.  Leyland also provided the 4-speed manual “crash” gearbox.  The bus ran on “electric steel” spoked wheels with solid rubber tyres, which was typical of the era as pneumatic tyres for buses were not introduced until the 1920s.

Among its many claims to fame, Barnsley no.5 is the oldest surviving full-sized British single decker bus in existence and is possibly the oldest in the world.  It is the only surviving example of a bus built to a tramway-era “combination car” design and is the oldest surviving bus of the extensive fleet that was formerly operated by British Electric Traction Group (BET), whose bus operations were eventually nationalised in 1968.  The famous BET “Magnet and Wheel” emblem – featuring a steel wheel embraced by the forks of a magnet (made out of tram track) with sparks flying in all directions – is displayed prominently on Barnsley 5’s gleaming green paintwork. 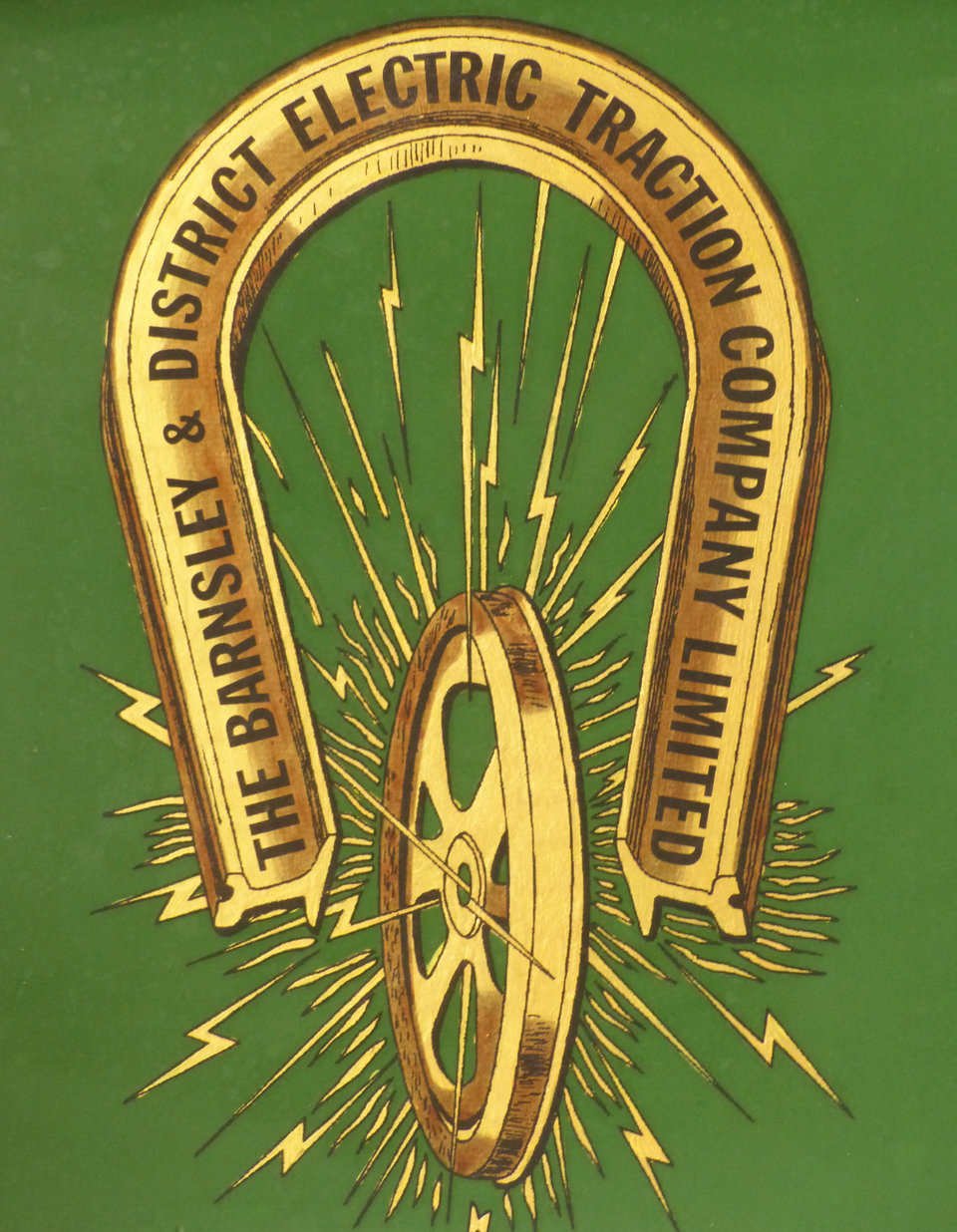 Bus operations commenced on 3 May 1913 with services linking Barnsley town centre and a number of outlying villages and townships, many of which were not accessible by tram for the reasons outlined above.  The route which was worked was denoted by a blue light on the roof, to aid those who could not read the destination.  After an initial period of trials, the onset of World War 1 ushered in a period of temporary retrenchment and by May 1915 the company was only operating 12 vehicles along two remaining routes (to West Melton and Pontefract), all the others having been discontinued.

At around this time, Barnsley number 5 was one of 5 recently redundant Barnsley Electric Traction buses to be sold to a BET subsidiary company – British Automobile Traction – that had established a branch in Reading with a view to operating buses in the surrounding area.  The original intention had been to operate the Reading services with a fleet of new Thornycroft buses but by this stage the War Department had requisitioned all Thornycroft chassis production for the war effort, so the five still nearly new Barnsley Electric Traction buses were sold to Reading instead. 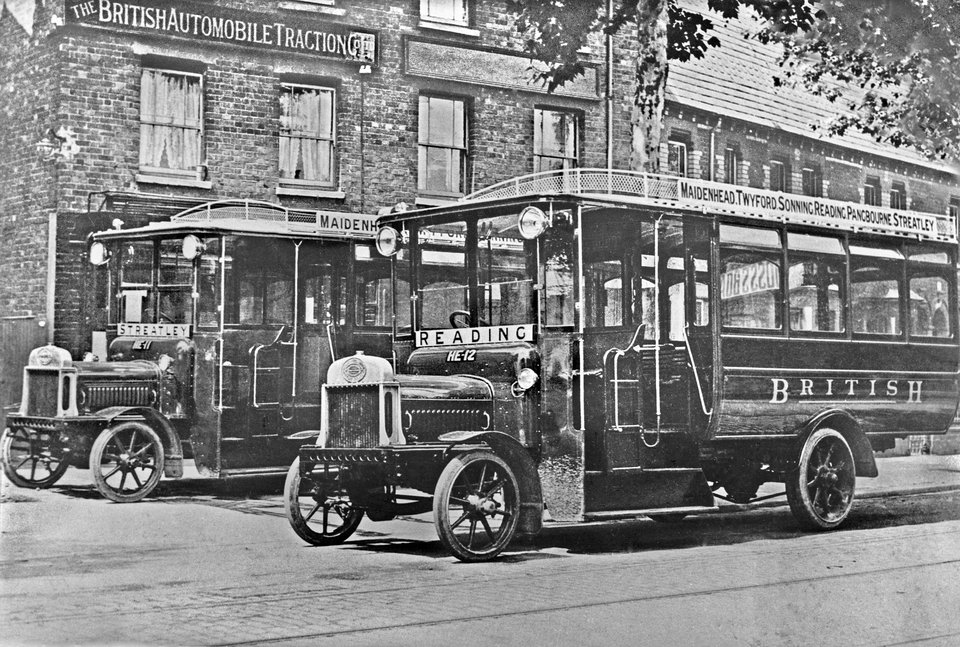 Leyland S3.30.Ts HE11 and HE12 outside the BAT offices in Caversham Road, Reading in 1915 for the Maidenhead and Streatly service. Photo reproduced with kind permission from the “Paul Lacey Collection”.

Eventually, British Automobile Traction managed to acquire a dozen new 26-seat buses built on Belsize 3-ton chassis and their arrival enabled the Reading operation to expand its route network.  Three of the ex-Barnsley buses, nos.1, 2 & 5 were re-sold back to Barnsley & District during the period April and November 1916.  Number 5 was eventually demoted to the status of a tow-bus before being withdrawn in 1924 after its early type of worm-driven rear axle had failed in service.

Following its withdrawal, the bus initially became a static caravan near Newark.  This was subsequently extended, by adding on rooms, to create a chalet bungalow, as a result of which some of the bus’s bodywork was seriously damaged.  The remains of the bus were eventually discovered and rescued by expert bus preservationist Mike Sutcliffe when the house was demolished in1997.  The running units had been removed – engine, gearbox, controls – and the phosphor-bronze worm wheel from the back axle was missing. 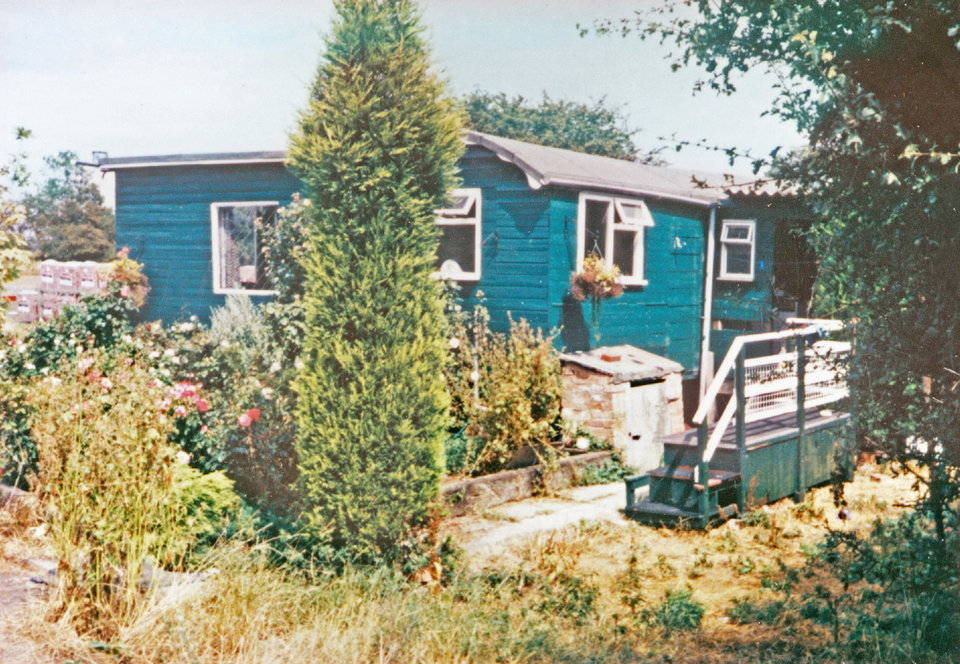 The chalet containing the remains of the Barnsley bus, as found in 1997. Photo courtesy of Mike Sutcliffe’s collection.

A replacement S3.30hp engine, gearbox, steering gear and controls were sourced from a derelict ex-Leicester Corporation Tramways tower wagon, No.2 (registration BC 8077).  This had been built in 1922, utilised exactly the same running gear as the 1913 bus, but had spent decades vegetating in an overgrown Yorkshire field.

The ambitious four-year restoration process was completed by 2006, using as many of the original parts and fittings as possible.  Owing to the incomplete state of the remains, however, many components had to be sourced elsewhere or, in some cases – for example the rear axle – a completely new worm wheel had to be made without any drawings to work from.  It’s first outing was on the London to Brighton Run where it took all the prizes as the Outright Winner.

Following its immaculate restoration, Barnsley no.5 has been extensively displayed at a variety of transport enthusiasts’ gatherings, including a Leyland Society Gathering at Crich in July 2008, together with Mike’s other seven early Leyland buses. 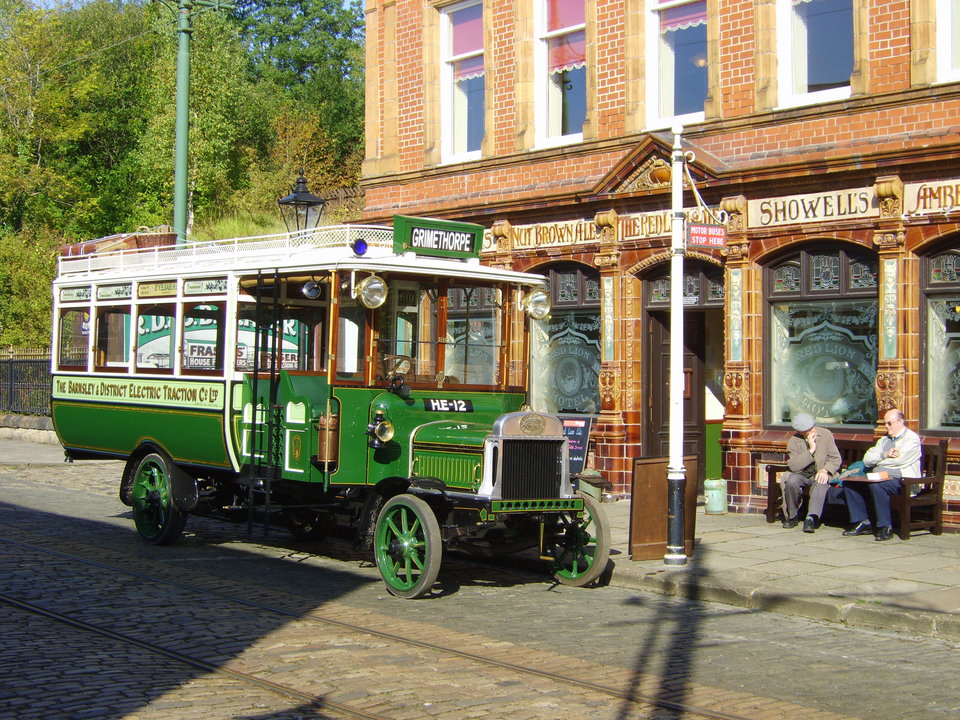 Barnsley & District no. 5 posing outside the Red Lion on an earlier visit to Crich, in 2008′  Photo: Gordon Burch

Another memorable commemorative event saw the bus return to Reading on 2nd August 2015, where it was photographed again outside the former B.A.T. offices as part of the centenary celebrations to mark the commencement of bus services in the Thames Valley. 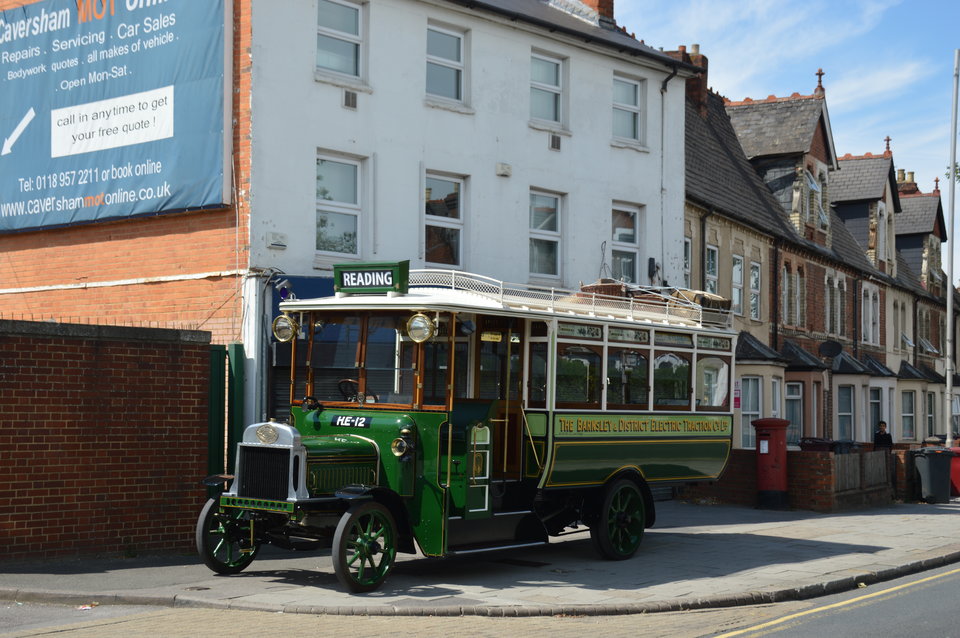 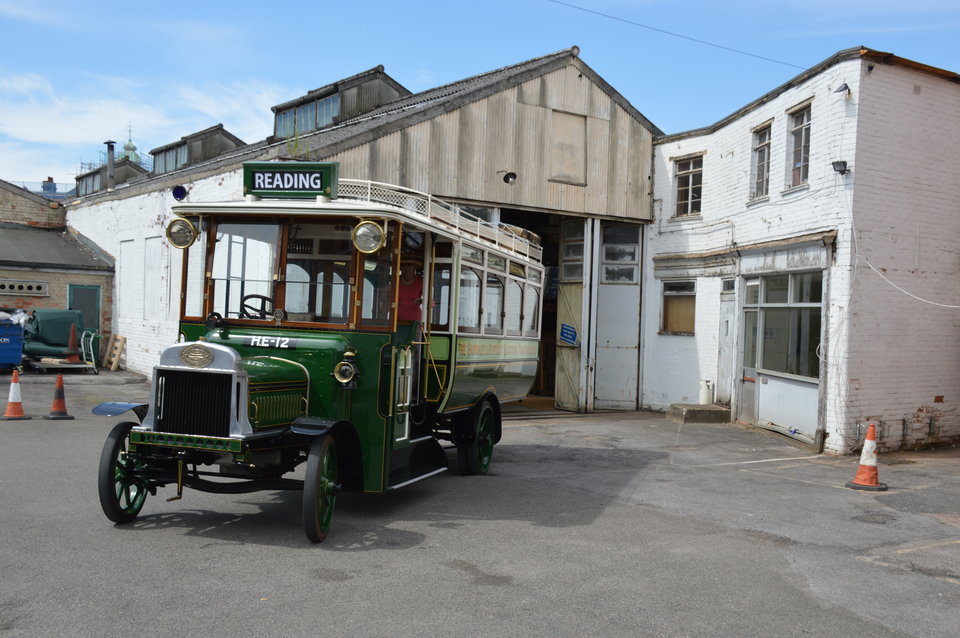 Not too long after this, in December 2017 the tramway museum was invited to purchase the bus on very favourable terms, so that it could form part of the permanent tramway collection.  The offer was gratefully accepted in view of the important role that the bus has played in the development of British tramway history and funding was secured approximately twelve months later. 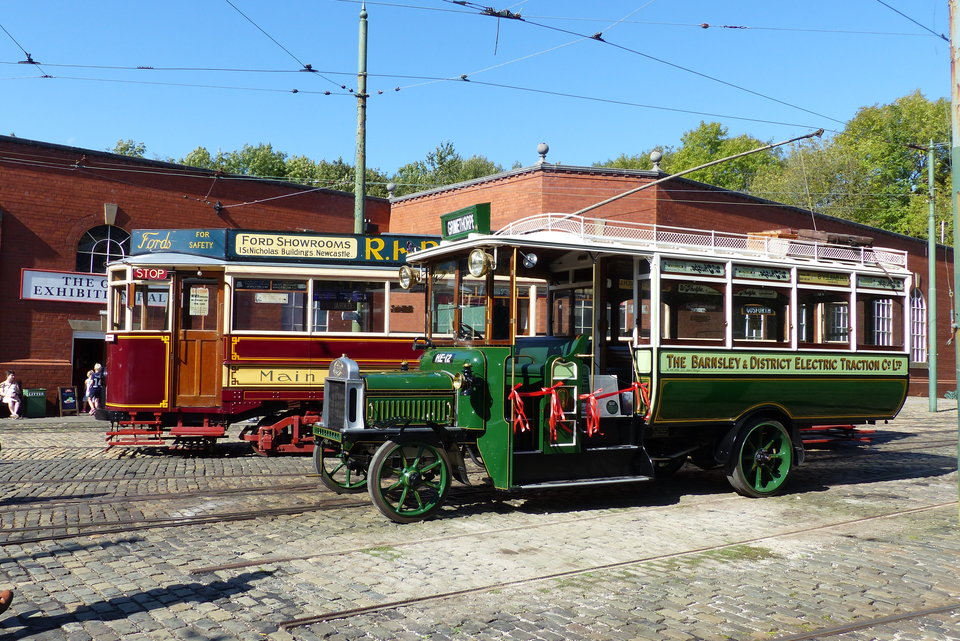 Barnsley no.5 posing alongside Gateshead 5, which also belonged to a British Electric Traction Company subsidiary; indeed, it was the last BET tramway in operation when services ceased in 1952. Photographed on 21st September 2019 by Jim Dignan

In the meantime, the bus took up residence at Crich, initially on loan during the fund-raising process, following its arrival for the 20th Leyland Society Gathering in July 2018.  The bus was formally handed over to the museum during the TMS’s 60th Anniversary commemorative event on 21st September 2019. 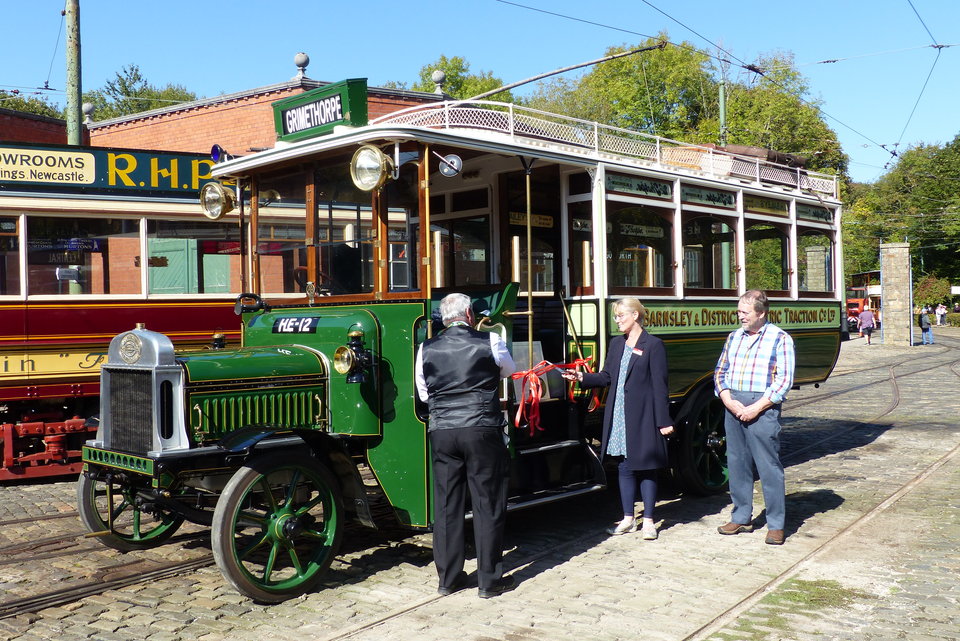 The formal hand-over ceremony took place on 21st September, 2019, the 60th Anniversary of the founding of the Tramway Museum Society. Photo: Jim Dignan

Relegated to the status of a tow-bus some time in the 1920s.

Converted into static caravan near Newark, later extended to form part of a house.

Discovered and taken into preservation in 1997.  Extensively and immaculately restored between 2002 and 2006 by enthusiast Mike Sutcliffe MBE.

Brought to Crich in July 2018 and acquired by Tramway Museum Society in 2019 after a short spell on loan at the museum during the fund-raising period.