Following in the Footsteps of George Stephenson

Today would have been George Stephenson’s birthday. Born on 9th June 1781 near Newcastle-upon-Tyne, Stephenson came from humble beginnings, learning to read and write at 18 years of age. He worked as and engineman and ‘brakesman’ at local pits, and when he married in 1801, made shoes and clocks to supplement his income. 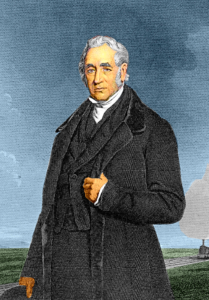 Stephenson progressed his career and became a civil and mechanical engineer. His work on the Stockton and Darlington Railway and the Liverpool and Manchester Railway, paved the way for other railway engineers and he is known as the Father of Railways.

Having established the Clay Cross Company mining coal in 1838 and in 1840 Stephenson came to Crich to plan to quarry limestone from Cliff Quarry, and the railway to take the material to the lime works. It is likely that trains would have carried coal and lime between Clay Cross and Ambergate around 1870.

George Stephenson retired in 1845 to Tapton House, Chesterfield, and began focusing on other ideas such as growing straight cucumbers in glass tubes! An example of the tubes can be seen in Stephenson’s Discovery Centre, above the Learning Centre at Crich Tramway Village.

George Stephenson died on 12th August 1848 aged 67. He is buried at the Holy Trinity Church in Chesterfield. His son, Robert, succeeded him as Chairman of his Company.

By mid-1957 Cliff Quarry was closed along with the small mineral railway, and in 1959 The Tramway Museum Society discovered the site at Crich and selected it as suitable for a Tramway Museum. By the 1960s, the Society members had an operating electric tramway, along George Stephenson’s original railway lines, which had become a tourist attraction.

For more detail, you can visit Stephenson’s Discovery Centre or purchase the book ‘George Stephenson’s Crich Railway’ by Bob Tebb and David H Smith priced at £3.00 from The Forge Gift shop. For more about the history of the TMS and The National Tramway Museum development, we also stock ‘Tramway Adventure’ by Ian Yearsley, priced at £2.50. 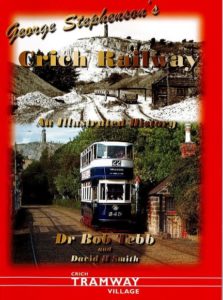 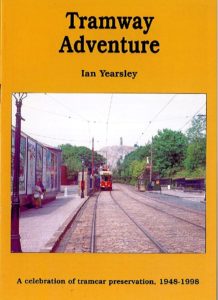